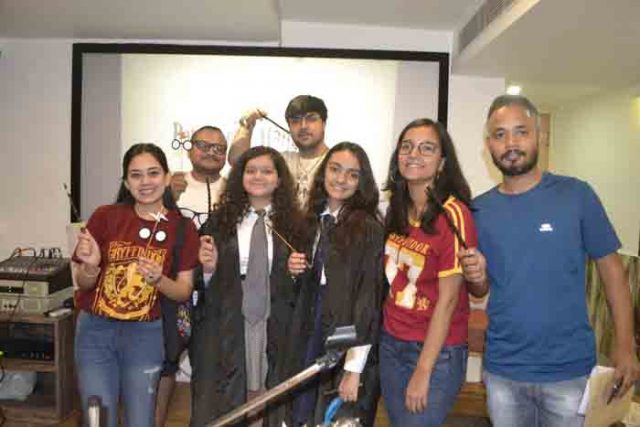 Dehradun, 8 Jul: Wizards, witches, and muggles gathered on Sunday in a cozy nook of an up and coming restaurant, here, for The Booknerds’ Annual Potterhead Hangout.
The event kickstarted with an introductory speech by Rohan Raj, co-founder of The Booknerds – a literary startup with the vision of connecting readers across the globe – while the participating Potterheads were stamped with the dark mark acting as death eaters who were actually undercover Aurors.
The moderator aka Hogwarts Historian for the hangout was Aradhya Kumar, a quintessential Potterhead and Doonite.
The event was also attended by Harry Potter book enthusiasts from schools like Olympus High School, Purkal Youth Development Society and many more, accompanied by their teachers.
The session came to life with the sound of Hedwig’s Theme played on the guitar by Devika, a Booknerds team member, followed by Nandini who read out loud the iconic scene in Philosopher’s Stone when Harry is informed that he is a wizard.
Aradhya administered the sorting of the members into the four houses of Hogwarts and then lead the teams through a fiery wizards’ quiz and the crossword puzzle. Throughout the hangout, random spells were cast, the points of which were added to the attendees’ respective houses.
While the final scores were being tabulated, several Potterheads read their favorite parts from the much-celebrated series and shared their experiences of reading the books.
Tushita from Olympus High School won the wizard’s quiz and House Hufflepuff defeated all the other houses by a hefty margin of 100 points. The winners were awarded the House Cup with goodies.
Neha Raj, co-founder of The Booknerds, presented a memento to the moderator, Aradhya Kumar, for his excellent conduction of the event and enthusiastic presence.