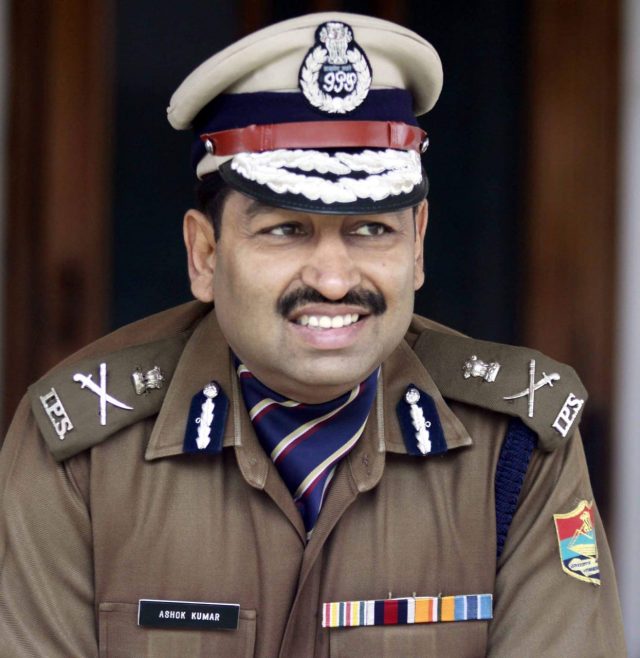 By Arun Pratap Singh
Dehradun, 2 Jan: Director General of Police Ashok Kumar has been regularly in the news ever since he took over from former DGP Anil Raturi on 30 November, 2020, particularly due to his special focus on improving the performance as well the image of the state police. An IIT Delhi Post Graduate (BTech as well as MTech from IIT Delhi), he has been an avid sportsman and still takes keen interest in sports (Badminton, in particular). He has authored four books, including his most famous book ‘Human in Khaki’, which reflects his focus on the humanitarian approach to policing.

He has served in Uttarakhand as SP – Chamoli, SP- Rudrapur, SSP – Nainital, and SSP – Haridwar, even when Uttarakhand was part of undivided Uttar Pradesh (UP) and, therefore, has wide experience of policing in the state. He has also served with the CRPF and BSF as IG on deputation basis, where he faced the Naxal challenge and managed the Indo-Pakistan border on the crucial Punjab frontier.

He spoke to Garhwal Post on a number of wide ranging topics. Some excerpts:

There were many big challenges before the Uttarakhand Police after the formation of Uttarakhand as a separate state. I have served here four times even before the formation of Uttarakhand. I have no hesitation in saying that as part of undivided UP, it was a fairly neglected region as far as Policing is concerned. The resources as well as manpower were meagre then. The infrastructure was very poor whether concerning the offices, buildings or even residences. There were merely 13 district level units of Police, two police ranges and two battalions. In all, merely 17 units of the Police. There was no Police headquarters, while today we have about 25 senior officers deputed to the Police Headquarters itself. The total manpower of the Police Department at the time of Uttarakhand’s creation was 11,000, while the present strength is 28,000. Soon after the creation of Uttarakhand, many top UP criminals and mafia elements tried to set up base and even settle down here. However, to the credit of Uttarakhand Police, they did not succeed to a large extent. This challenge was successfully overcome by the Police.

The level of confidence in the state police can be gauged by the fact that while, in most UP towns, with the exception of NOIDA and some others, girls or women can’t be seen commuting alone in the cities after the dark . In Dehradun, and other parts of the state, one can see girls moving alone during night time, too! So Uttarakhand Police have been able to achieve a reasonably high level of crime control and cases worked out, too. At the time of formation of the new state, the ratio of worked out cases was roughly 30 percent, while it is 80 percent now!

The law and order challenge in Uttarakhand is generally quite different to the law and order challenge prevailing in UP. In UP, the challenge is caste and community based, which is somewhat seen in only Haridwar and Udham Singh Nagar and parts of Nainital and Dehradun districts. Since Uttarakhand was created after a long agitation, the people are generally in agitation mode. Even then the protests don’t generally turn violent here and, therefore, apart from occasional moments when the Police had to resort to lathi charge, there have been no incidents involving firing etc. To resolve agitation related problems, Police usually resorts to convincing the people and deal with them with restraint. The biggest law and order challenges in this state are managing crowds during the Kumbh Mela and Kanwad Melas. To some extent, managing traffic and crowds during the Char Dham Yatra is another challenge.

However, some challenges and problems are rather unique to Uttarakhand when compared to UP or most other states – disasters and natural calamities. When I was IG, Garhwal Range, sometime around 2007-08, I had set up a unit of disaster management trained teams in Garhwal and trained them well. Later on, the State Disaster Relief Force was created out of trained Police personnel. They were trained very hard and they managed even to climb Mount Everest. This was a successful capacity building exercise. There are presently 31 SDRF units and the average time they should take to reach any disaster site is around two and a half hours. The number of police stations and chowkis is now much larger. Hence, the local police are still the first responders and they are engaged by the time SDRF teams reach the disaster or accident sites.

What do think about the Revenue Policing system that is still prevalent in Uttarakhand hills with crime on the rise even there? Is revenue policing still effective or should the regular police replace them?

In my opinion, times are changing and probably it is time to replace the revenue police with the regular police, at least in the region where the tourist inflow has increased and where traffic management also has become a major issue due to higher number of tourists or pilgrims visiting such places. For example, even in places like Chopta and Kedarnath valley, the tourist inflow is very high and though such regions don’t fall in our jurisdiction, still we have to depute police officials to manage the traffic and crowds because the Police have the skills and equipment like wireless communication sets which the revenue or the Patwari Police officials don’t. Of course, it is a political call, but as far as my opinion is concerned, with the exception of areas that are still very remote and away from the hustle bustle, regular police force is now required in the hills because of rising population, higher traffic movement, higher economic activities, rising crime and a large floating population.

What are the new or emerging challenges for the state police in Uttarakhand?

Well, I would list traffic management as a major challenge, while the drug menace is another. Cyber crime and social media are the other two emerging challenges in Uttarakhand. Of course, they have become major challenges in other states, too, but Uttarakhand is a small state having narrow roads but still with a very high vehicular population, both, local and floating. Even Dehradun having become a state capital has narrow roads and the traffic flow is beyond the carrying capacity. Dehradun has become an even larger education hub so it has a large youth population, both, from the state as well as other states. Many of them are attracted to drugs and this is emerging as a major challenge to deal with.

What about Cyber crime?

Cyber crime is a global challenge and here too it is a big challenge. As far as Uttarakhand Police are concerned, our performance in dealing with cyber crime has been better than most states. We are far ahead of other states in resolving cases of cyber frauds and crimes. Our capacity building towards dealing with this challenge has been excellent. We have two Cyber Police Stations and over 1,500 police officials trained in dealing with this challenge. We have launched the E-Suraksha Chakra Progamme especially with this objective. Police officials from each Police station are being trained to deal with cyber crime. There are cyber cells in each district. We have recovered over a thousand lost or stolen mobile phones, every year, which is probably among the highest for a state of this size. Our capacity building is satisfactory regarding this. We have managed to work out a large number of cyber fraud cases and have arrested criminals from as far away as Arunachal and even foreigners such as Nigerians. Still, with every economic, financial and even educational activity having gone online, cyber crime has become a huge challenge. Before the digital era, criminals were forced to be physically present at the crime scene to be able to commit crimes. In doing so, they were leaving footprints. Now, it is no more the case! Criminals can be sitting anywhere in the world to defraud the victim present in Uttarakhand or elsewhere. So they leave only digital footprints which are sometimes very difficult to trace. Social media and fake news using social media platforms is another major challenge. Hatred or rumours are easily propagated through social media. People can be easily incited through them. I feel the country needs stricter laws to deal with such a problem.

You are a well known author, too, having written the well known book ‘Human in Khaki’, which underlines the need for the police to be more humanitarian. Why is there such a huge gap regarding this in the country’s police?

The central theme of my book is my firm belief that the country needs victim-oriented policing. Unfortunately, this is not the general attitude of the Police. Majority of the Police Officers behave like Sahibs, they are self-centred. Due to the British legacy, the Police force generally does not behave like public servants actually serving the people. There is an urgent need to bring greater accountability as well as change in the attitude of the police officers and officials and they need to be more sensitive towards the public and the victims. Unfortunately, our grievance redressal system is also not very transparent and is rather weak. Of course, we are improving it but still there is a huge gap. As the DGP, I am focussed on instilling greater sensitivity among them, greater transparency in their working as well as greater accountability. I am also trying to raise their responsiveness towards the complaints filed by the public. We have taken penal action against several erring police officers found lacking in sincerity, accountability and performance. We have suspended some senior police officers, too, recently. At the same time, I am also concerned about the welfare of the police officials and their families. We are taking several major steps towards ensuring their welfare.

As the top Police Officer, may I ask you your opinion about Police Reforms which have been in discussion for decades but nothing has happened to really bring them in?

It has been a sensitive issue. Actually power is one thing that is not easy to let go. The Police are a mode of exercising power for the governments – the strong arm of the state. Who will like to let go of this control? Some reforms such as fixed tenures are being seen in the country due to initiative of the courts.

Uttarakhand has witnessed Maoist activities as well as Khalistani terrorism. They remain as major internal security threats here. Organisations like Sikhs for Justice are again trying to raise their heads in the state and they are basically backed by Pakistan’s ISI. We need to remain on alert to ensure that such forces don’t succeed. We have successfully curtailed Maoism in the state.

Garhwal Post has established itself as a credible, balanced and forward looking newspaper in India. Based in Uttarakhand, the daily is read by the aware, socially and culturally responsible, high-income elite of society.
Contact us: info@garhwalpost.in
online match making https://garhwalpost.in/sites-like-fabguys/