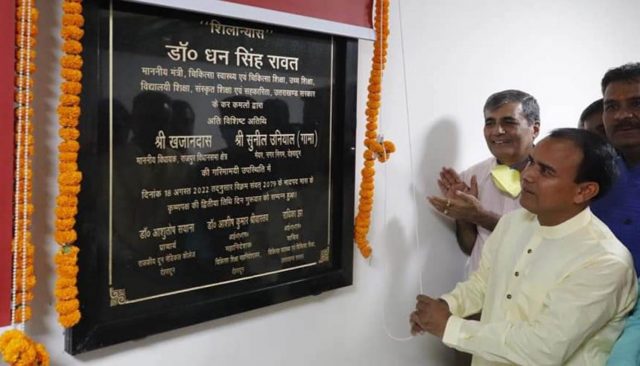 Speaking on the occasion, Rawat directed the officials to establish the Cath Lab at the earliest. He also observed that the cardiac patients would not be forced to go to private hospitals for examination and treatment of cardiac diseases once the the Cath Lab at Doon Medical College is established. He added that, to further improve the health services in the state, a new department of ‘Life Style Clinic’ would be opened in every medical college, where related certificate courses would also be conducted.

The Health Minister also announced that a separate cadre of super specialist doctors working with the government would be created and a new pay scale fixed for them.

Rawat added, “Now with hi-tech technology, heart-related diseases can be investigated and treated better at Doon Hospital. The Cath Lab will be set up in the hospital within a period of four months. For this, an amount of Rs 5 crores has been approved. This is the first Cath Lab in the state being established in a government hospital.”

He stated that the aim of the government is to provide hi-tech health facilities in government hospitals similar to private hospitals so that the people of the state can get treatment at concessional rates. The minister directed the officers to complete the work on the lab at the earliest so that it could be started on the occasion of the next State Formation Day on 9 November.  Rawat asserted that the Cath Lab in Doon Hospital would provide great relief to heart patients as well as the facility for complicated heart surgeries like valve replacement and post cardiac arrest procedures.

Rawat disclosed that the recruitment process of 339 Permanent Assistant Professors is underway through the Medical Services Selection Commission to meet the shortage of faculty in Government Medical Colleges. Along with this, the year wise recruitment process of 2600 staff nurses would also be started soon. The Health Minister also claimed that there had been improvement in institutional delivery in the state. Apart from this, to overcome the shortage of paramedical staff in the medical colleges of the state, a proposal for approval of about two thousand posts had been sent to the government. As soon as it was approved, the recruitment process would begin.

Garhwal Post has established itself as a credible, balanced and forward looking newspaper in India. Based in Uttarakhand, the daily is read by the aware, socially and culturally responsible, high-income elite of society.
Contact us: info@garhwalpost.in
https://garhwalpost.in/a-hook-up/ hookup dating sites south africa instant hookups