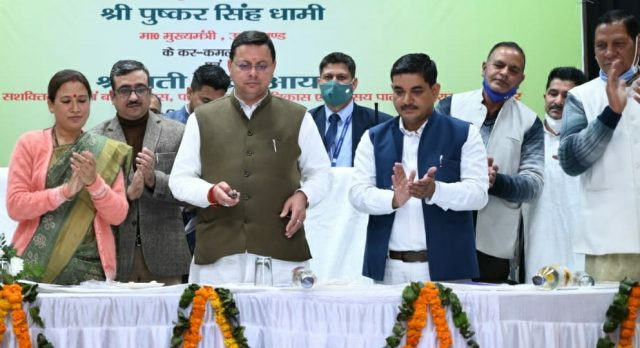 DEHRADUN, 8 Dec: Chief Minister Pushkar Singh Dhamitoday launched the Milk Price Incentive Scheme operated under the Department of Milk Development at a function held at IRDT Auditorium, Survey Chowk, Dehradun. During this programme, milk price incentive was also transferred by a click of a button by the CM into the accounts of the milk producers through DBT under this scheme. Chief Minister Pushkar Singh Dhami announced an increase in the incentive amount to 50 paise per litre of milk for the secretary of the milk committees of the plain areas and Re 1 per litre of milk for the secretaries of the milk societies in the hill areas. With the announcement of increase in the milk price incentive, the total amount of incentive has now gone up from Rs 4 per litre to Rs 5 per litre. The CM also directed the Directorate of Milk Development Department in Haldwani to release funds at the earliest for the purpose. Addressing the gathering, Chief Minister Pushkar Singh Dhami said that every problem related to milk product cultivators was being solved in coordination with all the departments. He said that about 53,000 people would directly benefit from this milk price promotion scheme. He said that this amount would go directly into the accounts of the beneficiaries through DBT, he said that such a scheme would prove to be a milestone in the times to come. He said that with the mantra of Prime Minister Modi, SabkaSaathSabka Vikas and Sabka Vishwas, the BJP Government in Uttarakhand was continuously moving ahead in every field. He said that all had a collective role in the field of milk revolution. He said that over next 5 years, the BJP Government would try to make Uttarakhand a leading state in many fields including dairy and milk production, horticulture and animal husbandry. He said that the development journey of Uttarakhand was a collective journey of all Uttarakhandis. He said that it was the priority of the government to solve the problem of every person related to milk products. Cabinet Minister Rekha Arya said that all concerned in state would bring white revolution in Uttarakhand with mutual coordination and cooperation. She said that in order to make the state self reliant, socially and financially capable in the field of milk production, the department was continuously working to implement a new scheme on the ground. Thanking the presidents of the Milk Development Committee who came from different districts, inspired them to work with more dedication and groundwork. During this, Secretary R Meenakshi Sundaram and others were present.

Garhwal Post has established itself as a credible, balanced and forward looking newspaper in India. Based in Uttarakhand, the daily is read by the aware, socially and culturally responsible, high-income elite of society.
Contact us: info@garhwalpost.in
gay bilatin men