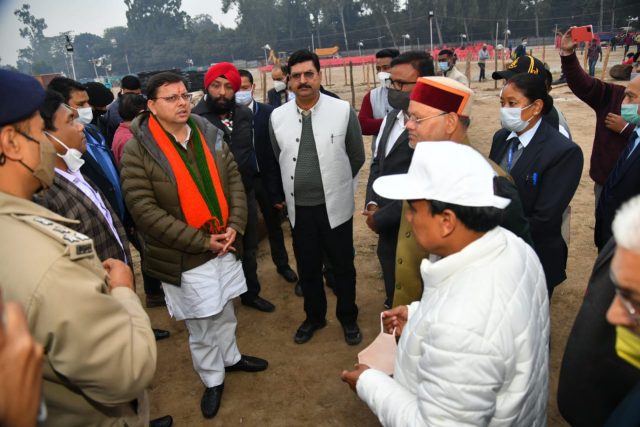 DEHRADUN, 1 Dec: Chief Minister Pushkar Singh Dhami today again conducted on-site inspection of the Parade Ground. The Chief Minister took stock of the arrangements for the proposed rally of Prime Minister Narendra Modi on 4 December. On this occasion, he directed the officers concerned to complete all the arrangements in this regard well in time. The Chief Minister directed that Prime Minister Narendra Modi would inaugurate and lay foundation stones of several projects and schemes worth thousands of crores on this occasion and for this the arrangements ought to be ensured well before time. The Chief Minister directed District Magistrate and CEO Smart City R Rajesh Kumar to expedite the construction of the Parade Ground and also directed that such a system be made so that the Parade Ground could be used for future events as well. On this occasion, Cabinet Minister Dr Dhan Singh Rawat, District Magistrate R Rajesh Kumar, SSP/DIG Janmaijai Khanduri, BJP leaders Kuldeep Kumar, Suresh Bhatt along with officials from the Public Works Department, Police and SPG were also present.

Garhwal Post has established itself as a credible, balanced and forward looking newspaper in India. Based in Uttarakhand, the daily is read by the aware, socially and culturally responsible, high-income elite of society.
Contact us: info@garhwalpost.in
https://garhwalpost.in/love-island-usa-casting/