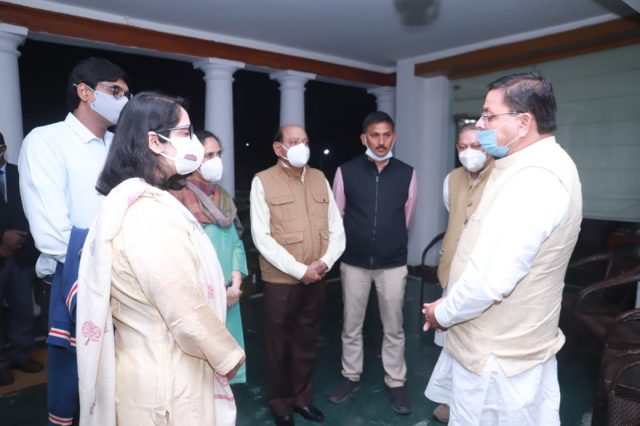 DEHRADUN, 9 Dec: Chief Minister Pushkar Singh Dhami expressed condolences on death of Chief of Defence Staff General Bipin Rawat by visiting the bereaved the family members of Late General Bipin Rawat at his residence in New Delhi. Condoling the untimely demise of General Bipin Rawat and his wife Madhulika Rawat, the Chief Minister prayed to God to grant peace to the departed souls. The Chief Minister said that the death of General Bipin Rawat was a great irreparable loss. His death was a great loss for the country especially the state of Uttarakhand, as well as personally for him.General Rawat always used to guide him as he was a son of soldier. The simplicity, spontaneity of General Rawat would always be in hearts of those who had the fortune to meet him. Meeting General Rawat never felt like meeting a general as he was a humble person. When he met Gen Rawat for the first time after becoming the chief minister, Gen Rawat had made a plan to go to his father’s regiment (Mahar regiment) Sagar. But destiny had something else in its mind and this could not materialise due to untimely death of Gen Rawat. Dhami also prayed for eternal peace to the departed soul while being at the residence of General Rawat.