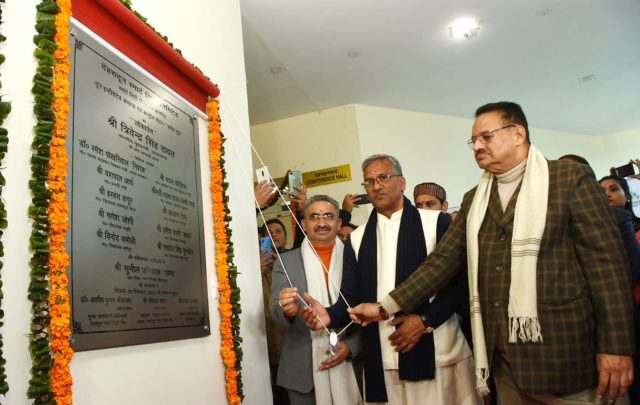 Dehradun, 25 Dec: Chief Minister TS Rawat today inaugurated the ‘Doon Integrated Command & Control Centre’, ‘Sadaiv Doon’, established at the cost of Rs 234.85 crore under the Smart City project. The centre has been set up at the ITDA in the IT Park on Sahastradhara Road.
The CM recalled that PM Modi had launched the plan to establish a hundred smart cities in the country. Dehradun would be the nation’s first completely smart city. He announced on the occasion of the late former Prime Minister Atal Behari Vajpayee’s birth anniversary that Dehradun’s new Collectorate would be named after that great leader.
The CM informed the gathering on the occasion that ‘Sadaiv Doon’ would monitor the city’s traffic, pollution levels, maintain surveillance, provide WiFi and other services. It would also coordinate other services provided to the city. It would also prove useful in management of the 2021 Kumbh Mela in Haridwar. He exhorted those present to give great importance to sanitation services. The public needed to cooperate in the elimination of single use plastic. Thus far, there had been a drop of 75 percent in use in Dehradun. In this context, he mentioned the technology introduced by IIP to turn waste into fuel. He announced that the Suryadhar Project would be completed by May, by which 29 villages would be supplied water. The Song and Jamrani Dams would provide water to Dehradun and Haldwani, respectively. Being gravity supply projects, it would lead to a saving of Rs 200 crores worth of electricity, every year.
Present on the occasion were MP Mala Rajyalaxmi Shah, Mayor Sunil Uniyal ‘Gama’, MLAs Ganesh Joshi, Khajan Das, Vinod Chamoli, ACS Om Prakash, ACS Radha Raturi, DGP Anil Raturi, DGP, Law & Order, Ashok Kumar, Garhwal Commissioner Dr Ravinath Raman, Director, ITDA, Amit Sinha, Secretary Sailesh Bagoli, etc.

Garhwal Post has established itself as a credible, balanced and forward looking newspaper in India. Based in Uttarakhand, the daily is read by the aware, socially and culturally responsible, high-income elite of society.
Contact us: info@garhwalpost.in
encounters dating app dating for professionals