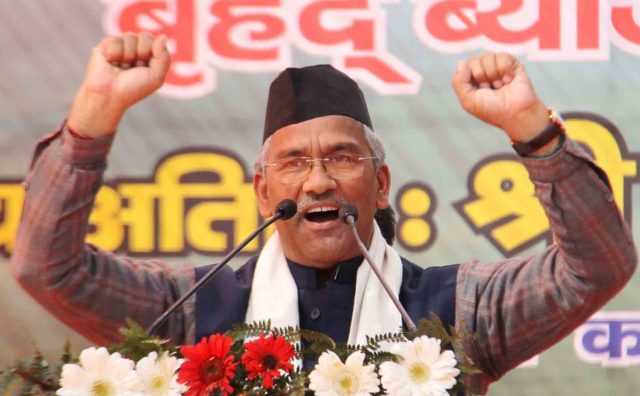 By Our Staff Reporter
Dehradun, 6 Feb: Chief Minister Trivendra Singh Rawat today launched a huge loan disbursement programme for farmers of the state. Under Deendayal Upadhyaya Cooperative Farmers Welfare Agricultural Loan Scheme, farmers were given loan up to Rs 3 lakh each. The CM was himself present at Bannu School Race Course Dehradun to launch this programme, while the loan disbursement programme was also held simultaneously in all the 95 development blocks and other five places of the state today. Under this scheme, loans were distributed to 25 thousand persons for the purposes of farming as well as towards purchase of agricultural implements, fisheries, herb production, poultry farming, poultry farming, silent farming etc. Chief Minister Rawat distributed cheques of Rs 3 lakhs each to 11 beneficiaries on the occasion.
On this occasion, the Chief Minister also honoured Padma Shri recipient Prem Chandra Sharma of Chakrata Block with a citation for commendable work in the field of farming and horticulture. Human Resource Development Minister Dr Ramesh Pokhriyal Nishank, Assembly Speaker Premchand Aggarwal, Cabinet Ministers Satpal Maharaj, Madan Kaushik, Subodh Uniyal, Harak Singh Rawat, Yashpal Arya, Arvind Pandey, Minister of State Rekha Arya, Leader of Opposition Indira Hridayesh and MLAs from allied areas were present in different programmes held for loan disbursement in various parts of the state today. Rawat claimed that the State Government was making several efforts to improve the economy of farmers. He added that his Government had held the farmers in high esteem and was ever ready to do any service towards their welfare. He emphasised that respect towards the soldiers as well as the farmers was of utmost importance for the development of the country and the state.
The CM stressed that the three new farm laws had been legislated by the Union Government in the interest of the farmers and they would reform the agriculture sector. These new bills would greatly benefit the farmers in the future. He claimed that Prime Minister, Narendra Modi had ensured the realisation of MS Swaminathan’s recommendations for the agriculture sector into reality. The MSP for the crops was being decided on the basis of one and half times of the cost. Chief Minister Trivendra Singh Rawat reminded that Deendayal Upadhyaya Cooperative Farmers Welfare Scheme had been launched earlier on a pilot basis from Roorkee. However, due to success of the scheme, it was now being extended further and to the entire state.

He further said that over 60 percent of loans given under this scheme in the past had already been repaid which was indicative of the fact that the farmers of this country were honest and believed in living from honest income.
Rawat said that till enough incomes were not generated in the villages and by the farmers, the economy of the country and the market situation would not improve. He reminded that in rural areas, growth centres were being set up on different themes to enhance people’s economy. So far 107 growth centres had been approved. Presently, these growth centres were proving to be effective in enhancing the livelihood of the local people. These growth centres would be expanded to all the Nyaya Panchayats of the state, he informed.
The CM further reminded that under the Chief Minister Solar Self-Employment Scheme, people had been encouraged to set up solar power projects of 25 kilowatt each. The state government would be purchasing power from these projects. The price for power purchase had been fixed at Rs 4.50 per unit. He added that in the past 3 years and 10 months, the total road length constructed equalled to the total road length constructed in the first 17 years of the state’s existence. The work of flyovers and roads was being completed before the scheduled time now and that he state government was determined to take Uttarakhand on the path of development.
On this occasion, Minister of State for Cooperative and Higher Education, Dr Dhan Singh Rawat, MLAs Vinod Chamoli, Harbans Kapoor, Munna Singh Chauhan, Ganesh Joshi, Khajan Das, Sahdev Pundir, Umesh Sharma, Anglo Indian MLA George Ivan Gregory Mann, Mayor Sunil Uniyal Gama, Secretary Cooperatives R Meenakshisundaram were among those present.