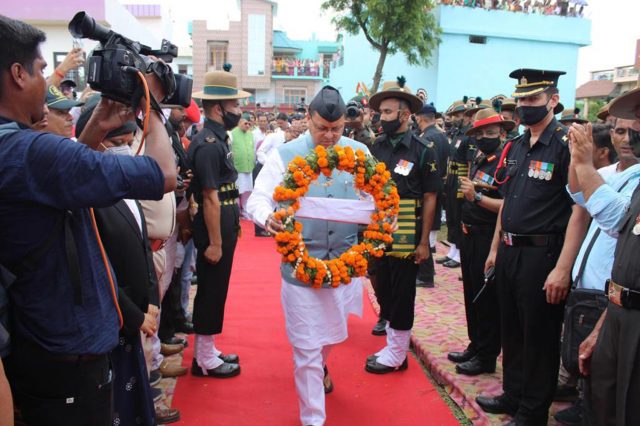 The CM Herbola’s family and laid a wreath before the mortal remains of Herbola, today. It may be recalled that although Herbola was martyred during Operation Meghdoot conducted in Siachen in 1984, it was after a gap of 38 years that his body was found in Siachen. The body was brought to his residence today in Haldwani, where the CM and others paid tribute to him. Later his mortal remains were consigned to the flames with full military honours.

Sainik Welfare Minister Ganesh Joshi said that the government stands shoulder to shoulder with the martyr’s family. The government would extend all possible help to the bereaved family.

After offering the wreath, the body of the martyr Chandrashekhar was taken to Chitrashila Ghat, Ranibagh, where he was given a heartfelt farewell with full military honours. Hundreds of people paid tribute to the martyr on this occasion with moist eyes. 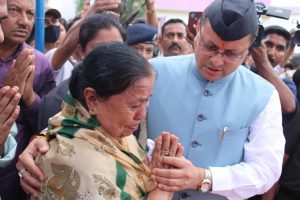 Lance Naik Chander Shekhar of 19 Kumaon, part of an initial patrol on Siachen Glacier in Op Meghdoot, got buried in an avalanche on 29 May, 1984. His mortal remains were finally found 38 years later by another patrol. The gallant soldier was from Haldwani and a befitting military funeral was organised by local military authorities with complete assistance from his parent unit. Chief of Staff, Uttar Bharat Area, Commandant, Kumaon Regimental Centre, Station Commander, Haldwani, Commanding Officer, 19 Kumaon and other military personnel attended the funeral. The civil dignitaries present included Chief Minister Pushkar Singh Dhami, the Minister of Women and Child Welfare, the DM, Nainital, Mayor, Haldwani, and Director, Zila Sainik Board. They met the fallen hero’s wife and relatives. A number of ex-servicemen also attended. The National Flag was handed over by the Commanding Officer, 19 Kumaon, to the late Lance Naik’s younger daughter, Babita Gururani, after the wreath-laying ceremony.

Garhwal Post has established itself as a credible, balanced and forward looking newspaper in India. Based in Uttarakhand, the daily is read by the aware, socially and culturally responsible, high-income elite of society.
Contact us: info@garhwalpost.in
spiritual singles free dating sites