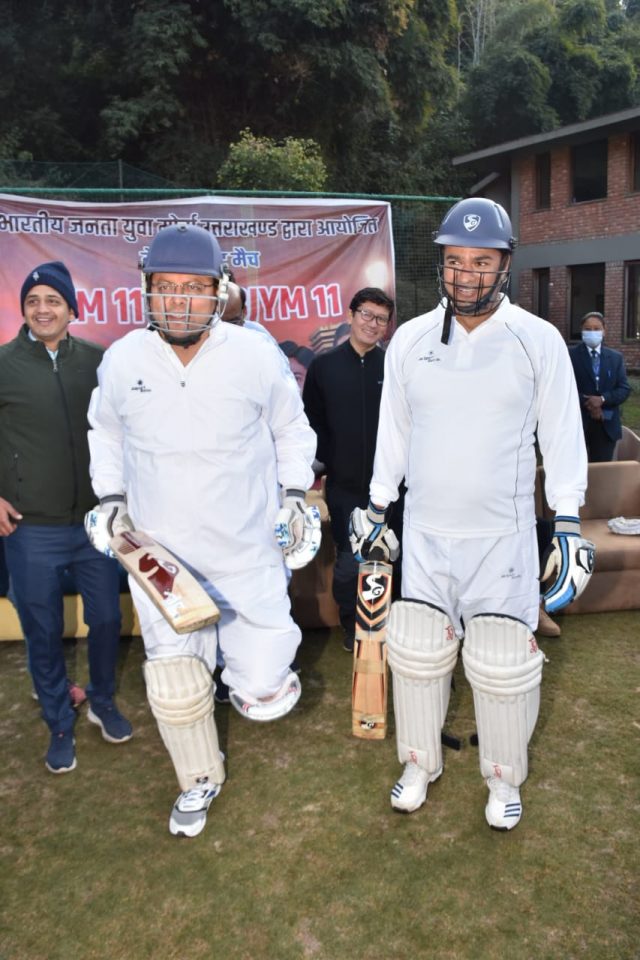 By Our Staff Reporter
Dehradun, 21 Dec: Today was a different kind of day for Chief Minister Pushkar Singh Dhami, several BJP MLAs and Bengaluru MP Tejasvi Surya as they played a cricket match instead of batting hard on the election pitch. 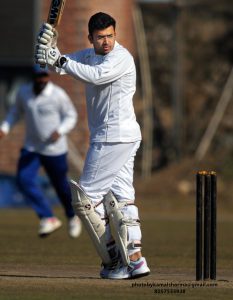 A friendly cricket match was played between the Chief Minister-XI and BJYM-XI at Abhimanyu Cricket Academy, here, today. The Chief Minister-XI was led by Chief Minister Pushkar Singh Dhami, himself, while the Bharatiya Janata Yuva Morcha (BJYM) XI was led by Bengaluru MP and current BJYM National President Tejasvi Surya.
The Chief Minister-XI won this match by 4 runs. Batting first in the 7 over match, under the captaincy of Chief Minister Pushkar Singh Dhami, the Chief Minister’s team scored 49 runs for the loss of 2 wickets. Dhami scored 14 not out. He opened the batting for his team along with SSP/DIG, Dehradun, Janmejay Khanduri. Cabinet Minister Subodh Uniyal also played for the CM-XI.
Chasing the target, BJYM-XI under the leadership of Tejasvi Surya could score only 45 runs in the stipulated 7 overs, losing 1 wicket. Dhami while playing also got slightly injured.
Speaking after the match, Chief Minister Dhami reminded that sport is positive activity that enhances brotherhood. He also noted that the purpose of such events is to increase camaraderie in social and political life. A friendly cricket match was played between both the teams today. The Chief Minister said that the government aimed to ensure continuous development of Uttarakhand and take the benefit of development to the person standing last in the queue. He reminded that a new policy had been brought to promote sports in the state. Efforts were being made to provide all kinds of facilities to the players under the new policy. Many schemes were being run to bring the best out of the youth and to help them progress in life. On this occasion, the Chief Minister also felicitated the players of Uttarakhand who had played in the Ranji and Indian teams.
Present on this occasion were Cabinet Minister Subodh Uniyal, MLAs Khajan Das, Sahdev Singh Pundir, Deshraj Karnwal, BJYM office bearers and officials of the CM’s office.