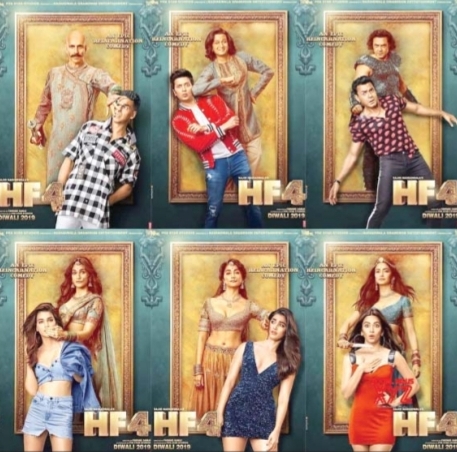 The aspiration to take the audience on a laughter riot through the experiences of a bunch of mad caps as cast in the fourth series of Housefull turned out to be a blunder. Weak direction, a stupid story and unappealing comedy marred the film’s character. Housefull franchises have always witnessed jam-packed houses. This one too had all-filled seats but reality did not live up to expectations. This insanely disappointing reincarnation comedy fore mostly lacked hilarity. The crackbrained funny scenes are filled with boredom and repetition. The boys or grown men as boys are a misfit against the young girls with an intention to make girls look only beautiful and with no significant roles to perform. The best stars of Bollywood stood wasted in the murkiness of a fun-less comedy. The only one who shines in the cloudy sky is Akshay Kumar, maybe because he has all the weight bearing role or he had to shake more limbs than others. It is understandable that this franchise never required anyone to seek logic or reason yet it always provided some relishing comedy chops to bask upon. But sadly, Housefull 4 is directionless. It has the faint flavour of spices picked from other films made in the past making it a cheaper and unrefined version of Baahubali in some sets including palaces, procession, waterfalls; reflections of Khilji of Padmaavat fame in Bala’s character; dress copied from Bajirao and strain of dialogues picked from somewhere else. It has pigeons named as Neil Nitesh Mukesh. It has a tribal leader with curved fangs and scary canines ready to tear off the human flesh in the role of Gama performed by Rana Daggubati. It has a bald, Comedy of errors yet fails to be even idiotically funny selfish, ruthless prince in Bala who undergoes character change instantly after discovering his love. And this love gets interchanged in his present birth and he effortlessly tries in the most crazy way to mend things. Strangely, the incarnated versions of all the characters who were together in 1419 – their lives seamed in one thread– are coincidently together in 2019 albeit in a mismatched state. The act to realign things and set the relationship of the past in an ordered state is the task at hand for these oddballs. Akshay Kumar as Bala, 600 years ago and a hairdresser now, has a peculiar habit to forget things whenever a loud noise falls on his ears. Still he manages to infuse occasional laughter currents in the hall with his agility, calibre and seamless comic timing despite the fact that the story, screenplay and direction overshadow his performance. Riteish Deshmukh with suspicious gender disclosure performs flawlessly in every scene. That his role has not been written well, is a fact he cannot be blamed for. Bobby Deol comes with his dole-shole and macho looks. His presence is a fresh change in the house. The girls – Kriti Sanon, Pooja Hegde and Kirti Kharbanda, all have been made to dress up from the same bale of cloth with minor alteration. Made to stand in line in most of the scenes as if in a fashion parade, it doesn’t look like a film. The eyes roll here and there in confusion to figure out the difference between the three. They stand as beautiful dolls with perfect figures, same hair colour, streaks and locks, almost same lip-colour and attitude and not much to do in the film. Due to mild elaboration in the part played by Kriti Sanon, she gets some space to show her acting. Ranjeet, Chunkey Pandey and Johnny Lever try hard to stand out in their parts but all are compulsive additions. It was sad to see Rana Daggubati as Gama and later as the girl’s cousin; two roles with no substantial impact on the audience. Why at the first place did Rana pick this role is a question I’m still struggling with. Even Nawazuddin Siddiqui was seen in a song number, hoping to add some matter in the story, but he came and evaporated with the heat produced by the song. The songs may be liked by youngsters but are overly flamboyant. Even Akshay Kumar cannot save the movie. The CGI effects to add to the grandeur of the sets never raise the eyebrows with praise. What trolled in the mind of the producer Sajid Nadiadwala to even attempt to make something as stupid as this? Comedy has no bars. Its main aim is to make one laugh but the grace and class should not be compromised. Under the direction of Farhad Samji, Housefull 4 with the overflowing nonsense, intolerably sexist approach, homophobic jokes and the senseless running for 149 minutes especially a day before Diwali is a sheer waste of time. I have no reasons to recommend the film. The only purpose I see it serving is to get some wardrobe ideas for girls to dress up for marriage functions. Housefull 4 nowhere attempts to rise beyond its previous series, rather the graph only loses height. The movie is a blunder and watching it on the occasion of Diwali will be a bigger blunder.

Garhwal Post has established itself as a credible, balanced and forward looking newspaper in India. Based in Uttarakhand, the daily is read by the aware, socially and culturally responsible, high-income elite of society.
Contact us: info@garhwalpost.in
buckinghamshire singles free dating sites vancouver