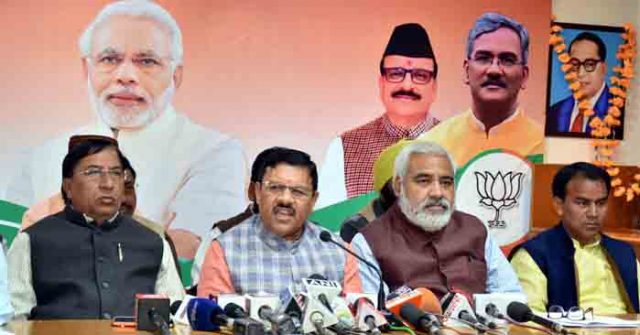 DEHRADUN, 25 Mar: In charge of the BJP affairs in Uttarakhand, Shyam Jaju today claimed that the promise made by Congress President Rahul Gandhi on a minimum income guarantee was hollow. Addressing the media at the BJP State Headquarters here, today, Jaju reminded that Rahul Gandhi’s grandmother Indira Gandhi had also promised to eradicate poverty way back in 1971. What happened to that slogan? he asked. Rahul needed to answer. He added that Rahul Gandhi ought to first answer what happened to the promises made by his party to the people in the three states where it recently won. The loan waiver promised in MP, Jharkhand and Rajasthan was proving to be a hollow promise and the country had come to know of this reality.
Jaju reminded the media that the Congress party ought to be asked what happened to the promises made by it during 55 years of its rule in the country! He claimed that the people had now turned wiser and could not be fooled by the Congress anymore.
In response to a question, Jaju rejected Congress president Rahul Gandhi’s charge that the Modi Government had insulted senior leader BC Khanduri by removing him from the Parliamentary Standing Committee on Defence, adding that it was the BJP which made him the head of the committee. It was the BJP which made another senior party leader from Uttarakhand, BS Koshiyari, chairman of some important standing committees of parliament and also made young SC leader from the state, Ajay Tamta, a union minister. He asserted that BC Khanduri was removed from the panel for health reasons and that Khanduri himself was well aware of this. There was no question of insulting Khanduri. He added that Uttarakhand was a priority state for the BJP and had given highest ever grants under various schemes to Uttarakhand.
Jaju claimed that nationalism was going to be a major issue in these elections and accused the Congress of politicising the issue of national security, adding that Congress leaders were questioning the valour of the armed forces on a daily basis. Leaders like Rahul Gandhi and Randeep Surjewala were questioning the valour of the armed forces on a daily basis after Pulwama and the subsequent air strikes against terror targets, which was akin to demoralising the security forces of the country. He charged Congress with doing politics on the martyrdom of security personnel and added that nationalism was inherent in the BJP leaders and the BJP respected the armed forces of the country like no other party did. It was the Modi Government that had brought One Rank One Pension for the defence personnel. He reminded that Prime Minister Narendra Modi celebrated every Holi and Diwali on the borders with the forces, and he had shown that the country could respond strongly to the attacks made by the enemy. The BJP did not require any character certificate from Congress in this respect. Jaju also claimed that the Army action against terror targets in Pakistan after the Pulwama terror attack had further strengthened people’s faith in the strong leadership of Modi.
Reminding that the BJP had won all the five parliamentary seats from Uttarakhand in the year 2014 as well as the assembly elections held in 2017 with a thumping majority, he asserted that the BJP was in even stronger position in Uttarakhand. Uttarakhand was a border state and the people were more sensitive on issues of national security. The BJP had taken a lead in announcing all the candidates before Congress in Uttarakhand and was carrying out a systematic campaign by organising a large number of programmes in each assembly segment of every parliamentary constituency.
Others present on the occasion included Party General Secretaries Naresh Bansal and Khazan Das, Minister Dhan Singh Rawat, MLA Vinod Chamoli, and senior leaders Dr Devendra Bhasin, Shadab Shams, Virendra Singh Bist, Anil Goyal and Rajiv Uniyal.