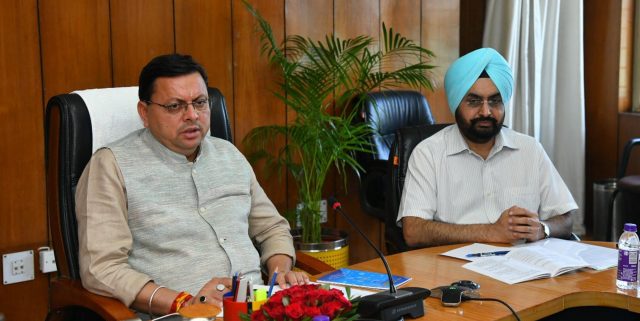 By Our Staff Reporter
Dehradun, 25 Oct: The Government has raised the amount of relief assistance that is given to disaster affected persons under various heads. Instructions in this regard were today given by Chief Minister Pushkar Singh Dhami to the officers concerned. Dhami also directed the officials to arrange for additional amount of relief wherever necessary from the Chief Minister’s Relief Fund, if it was not possible to grant additional relief under relevant provisions of the Disaster Relief rules. Dhami also directed the officials to constitute a high-powered committee to monitor the relief and reconstruction work being undertaken due to disaster. He said that the maximum possible assistance be given to the disaster affected in the state. People should not have to worry unnecessarily about getting the assistance amount. All possible help had to be ensured to the needy and at the earliest.
These directions were issued by the Chief Minister while he was reviewing the disaster relief work with the top officials in his office at the Secretariat.
On the instructions of the Chief Minister, it was decided that the assistance given to the affected families for clothes, utensils and household items would be increased from Rs 3800 to Rs 5000. Assistance for completely damaged houses, presently being given at Rs 95 thousand per building in the plains and Rs 1.0190 lakh per building in hill areas would be increased to Rs 1.5 lakh per building in, both, the plains and the hills. The assistance amount for partially damaged (pucca) buildings has been increased from Rs 5,200 per building to Rs 7,500 per building and for partially damaged (kutcha) building from Rs 3,200 per building to Rs 5,000 per building. Relief amount of at least Rs 1,000 would be given for land damage. It was also decided that damage to the front or back courtyard or to wall of the house would also be considered as partial damage. Presently, no relief is payable for the same. In the residential colonies where electricity meters fixed outside the house got damaged due to recent calamity on 18 and 19 October, the Power Department would replace the faulty electricity meters free of cost.
The CM made it clear that the payment of excess amount to be paid to the affected under the State Disaster Response Fund norms would be borne from the Chief Minister’s Relief Fund. Similarly, in cases of damaged buildings, if the losses to any building were outside the purview of SDRF norms, then assistance in such cases would also be provided from the Chief Minister’s Relief Fund.
Small traders outside the purview of GST would be given assistance of Rs 5000 in case of losses due to water logging in the shop. If the assistance was not covered in the standards of SDRF, the assistance would be provided from the Chief Minister’s Relief Fund. Dhami reiterated at the meeting that the roads of the state should be made pothole free by 7 November. He directed both the Divisional Commissioners to monitor the road repairs continuously.
Chief Secretary Dr SS Sandhu, Additional Chief Secretaries Manisha Panwar, Anand Vardhan, Additional Principal Secretary Abhinav Kumar, Secretaries Amit Negi, R Meenakshi Sundaram, Shailesh Bagoli, SA Murugesan, Dr BVRC Purshottam, Commissioner Garhwal Ravinath Raman, Commissioner, Kumaon, Sushil Kumar along with other officials were among those present at the meeting.