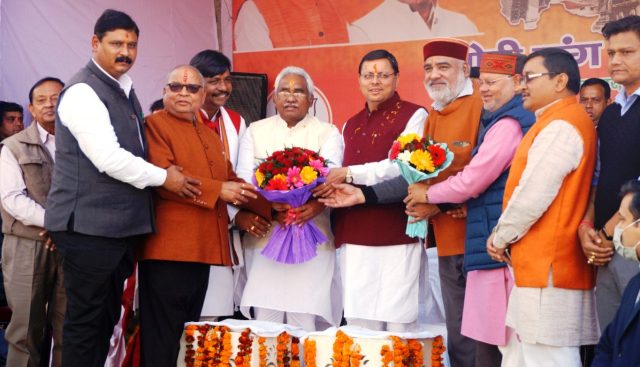 DEHRADUN, 12 Dec: Chief Minister Pushkar Singh Dhami, Senior Cabinet Minister Banshidhar Bhagat, BJP State President/MLA Madan Kaushik today flagged Development and Public Suggestion Raths/LEDs for wide publicity of public welfare schemes and policies of the governmentfrom UnchaPul Ramlila Maidan in Haldwani. These raths (Vehicles), apart from giving publicity of government policies and achievements would also be used to collect suggestions from the public in respect of the government policies. Speaking on the occasion, Chief Minister Dhami said that in order to take the schemes of the government to the people, 29 vehicles called as Development and Public Suggestions Raths would traversethe 29 assembly constituencies of Kumaon region and publicise the government schemes, policies as well as achievements and at the same time would also seek public suggestions. These chariots would be screening the publicity material through LED screens installed in each vehicle. Dhami said that this publicity campaign of government schemes would be run throughout the month of December. Chief Minister Pushkar Singh Dhami said that many schemes were being run by the state government in public interest. The benefits of these schemeswas reaching the people but wider publicity would ensure that people from all sections of the society as well as those in remote areas also learnt and took full advantage of these schemes. Keeping in mind every section of the society, public welfare schemes were being run. The first priority of the government was to solve the problems of the people. The government was working as a partner with the people. He said that the state and the country had become proud, selfrespecting and strong under the leadership of Prime Minister Modi. He said that the Government of India had sanctioned projects and schemes worth Rs 1 lakh crores for the development of the state. He also reminded that Prime Minister Narendra Modi was coming to Kumaon region soon and would also announce some major aid to the state. Dhami said that the State Government was working day and night to bring development works to the ground along with financial management. He said that a road map was being prepared to make the youth state the number one state of India when it turned 25. Welcoming all the guests, Cabinet Minister Banshidhar Bhagat said that all-round development had taken place under the leadership of young Chief Minister Pushkar Singh Dhami, while new energy had been infused. State President BJP/MLA Madan Kaushik while addressing said that 29 development and public suggestion LED chariots were being flagged off from Ramlila Maidan for Kumaon assembly constituencies while 41 chariots would be flagged off from Dehradun on 16 December for the constituencies of Garhwal region. He said that through these chariots, information about development works and public welfare schemes would be conveyed to the people from even the remotest of the areas while the suggestions of the public would also be taken through the chariots so that further plans would be made on the basis of the suggestions of the people. He said that under the leadership of Prime Minister Narendra Modi, the state government had taken the state and the country forward and have increased the country’s pride in the whole world. He claimed that BJP government did what it said and that the government had set records of development works in the state in the last five years and had increased the respect of soldiers. On this occasion, District Panchayat President Bela Tolia, Vice President Anand Darmwal, District President Pradeep Bisht, Pradeep Janoti, Suresh Bhatt, Mayor Dr Jogendra Pal Singh Rautela, District Magistrate Dhiraj Singh Garbyal, SSP Preeti Priyadarshini and many dignitaries and officials were present.