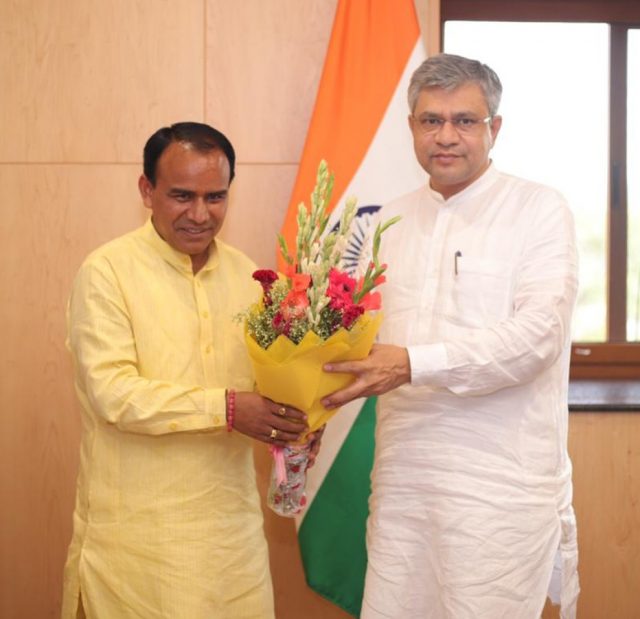 Dehradun, 20 Aug: Cabinet Minister Dr Dhan Singh Rawat called on Railway Minister Ashwini Vaishnav in Delhi, today, and demanded higher rate of compensation for land in his constituency acquired for the Rishikesh-Karnaprayag Railway Project by raising the circle rates for compensation. He urged the Railway Minister to implement the decisions of the Court and give compensation to all the affected families and also to the partially damaged houses in Srinagar. Along with this, he also urged the Union Minister to bring the Gram Panchayats of the state under the Bharat Net project.

Rawat called on the Union Minister of Railways, Communications, Electronics and Information Technology Ashwini Vaishnav in Delhi, today. He held a detailed discussion with the Union Railway Minister on the Rishikesh-Karnaprayag railway project and apprised him of the problems of the project affected families. He urged the Union Minister to increase the circle rates in Srinagar assembly constituency and give compensation to the project affected as per the revised circle rates. He informed Vaishnav that the people affected by the railway project have been deprived of proper compensation.

Rawat raised the issue of compensation to only one person of the affected family before the Union Railway Minister and urged him to award compensation to all the sons in the family as per the decisions of the LARA Court. He also raised the demand for compensation for partially and fully damaged houses also in Srinagar and other areas. Rawat also invited the Union Minister to visit Uttarakhand. In order to connect the Panchayats of the state with high speed internet, Dhan Singh Rawat asked the Union Minister to start the Bharat Net project in Uttarakhand also. Dr Rawat said that Union Minister Ashwini Vaishnav, taking a positive approach, assured immediate action on removing the problems of those affected by the railway project and to give proper compensation.

Earlier, Rawat paid a courtesy call on the newly elected Vice President Jagdish Dhankhar. On this occasion, he informed the Vice President about the implementation of National Education Policy-2020 in the state and also about the future plans of the Education Department including running Balvatikas at the primary level.