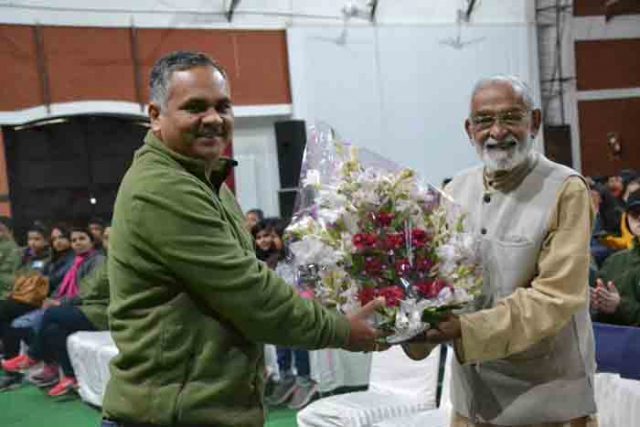 DEHRADUN, 7 Dec: The last day of The Doon School Regional Round Square Conference started with the address of the second keynote speaker, GK Swamy, a distinguished educationist who did his masters in Economics from Madras University.

Swamy, with his wife Chinniswamy, founded “Purkal Youth Development Society” in Dehradun to raise awareness about the importance of education in rural areas. After graduating, he settled in Mumbai as a consultant and counseling entrepreneur. He spoke about the PYDS Learning Academy, which presently houses 531 underprivileged students and his efforts to make them effective learners for the next generation. He mentioned that 194 students have graduated from PYDS, so far. He also spoke about his wife’s initiatives for the deprived children, empowering women and thereby the ethos for the entire community.

The delegates then set off for social service initiatives. Being one of the ideals for round square, service was one of the foremost activities included in the conference. The service was held at 6 different sites: Purkal Youth Development Society, Cleanliness Drive with Gat Chunabhatti and Tapovan Thakurpur Village, Govt High sSchool, Upper Kandoli, and John Martyn School, Village Salangaon. Everyone exhibited the true spirit of service and worked as a team. After the service everyone was back at the Chandbagh campus to pack their luggage at the boarding houses. The closing ceremony comprised a band performance by the Doon School boys followed by a vote of thanks by Deputy Headmaster Kamal Ahuja and Young Round Square representative Anand Kumar Mandhian.

The farewell dinner was served at the Central Dining Hall, after which the delegates shook the dance floor in form an electrifying session.