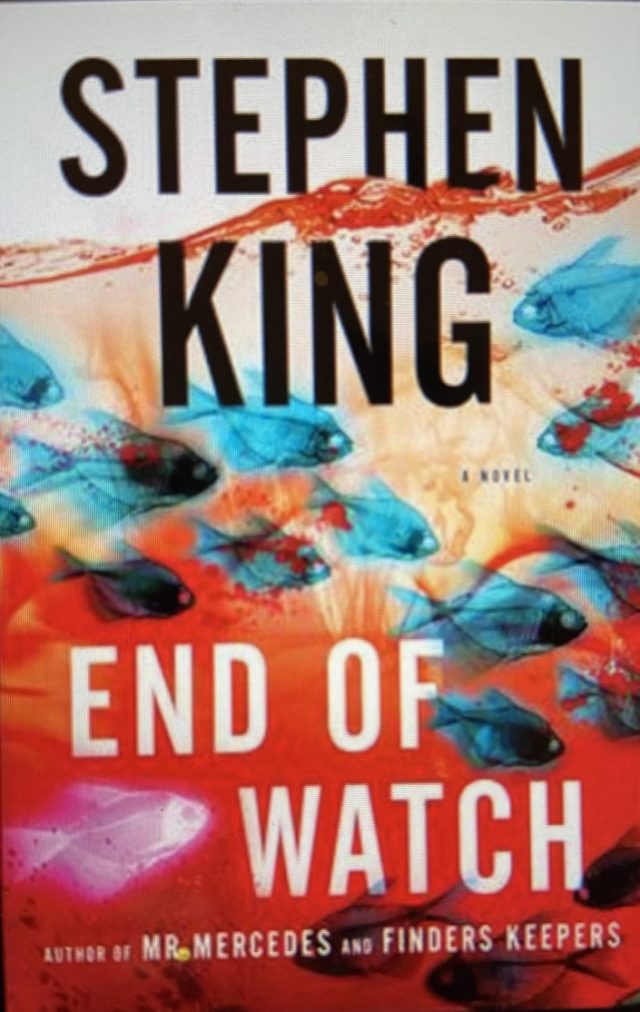 Its a cold winter’s evening, the rain beats a steady tattoo on
our tin roof and the wind howls around the house before going to sleep.  Peals of thunder rent the sky. A perfect setting for plunging into the horror-laced macabre world of Stephen King’s fifty-fifth novel End of Watch. Why pick bones with an author whose sales graph (with 350 million copies sold worldwide) is like a ramp to the sky.
This time around, in a hospital, at the Lake State Traumatic Injury Clinic lies Brady Hartsfield in a vegetative state. Some believe that he was responsible for the Mercedes Massacre, where he plotted to blow up a rock concert full of teenagers. Eight killed and many injured as he mows down a queue of people. A man pulled up, red-faced and gasping. ‘It was a car. Tore through the crowd like a mowing machine. I don’t know how many he hit. We were penned in like hogs because of the posts they set up to keep people in line. He did it on purpose and they are laying around up there like… oh man, dolls filled with blood.’
Trouble is he is all set to do it again.
Though things are not as they appear. You will have to move on, go past Brady’s gaping, the fixed stare and the drool in Room 217 to find that things are right. Make no mistake, he is all there, acquiring lethal new powers to wreak havoc without ever having left his bed. He is using his warped mind to move small objects in the cloistered hospital room – the blinds, the bedclothes, the door to the bathroom – and has the ability of getting into the bodies of his victims to dominate their thoughts in such a way that he can propel them to end their lives.
Once they are in Brady’s control, he uses the App to dominate their minds and persuade them to commit suicide. The targets are the very teenagers who escaped death when Brady’s plan to destroy the concert venue failed. Brady’s ultimate goal, however, is to lure Hodges into the game and exact revenge. Brady uses the bodies of both a corrupt neurosurgeon and a hospital librarian as puppets and red herrings to do all his dirty work and misdirects the police while he makes his final move to destroy his arch enemy, all the while unaware that Hodges is already racing the clock against his own death.
Meet retired police detective Bill Hodges, the unassuming hero of the earlier two books, who owns a detective agency named Finders Keepers. But the sand in his hour-glass is fast running out (read the Big C catching up with him), as he sets out with his intrepid ‘Watson’ –  his partner Holly Gitney – to investigate what on the surface seem to be a string of suicides with links to the Mercedes Massacre. Soon it becomes obvious that each death has one thing in common: they are all connected, in one way or the other, to Brady, who is well aware that it was Holly’s blow that has reduced him to his present comatose state.
Together Bill and Holly set out to investigate a murder-suicide which seems to be linked to the massacre and are sucked into the dark vortex of a weird case whereby they jeopardize, not just their own lives but those of friends as well. The lives of folks like Jerome Robinson and his young daughter Barbara are at stake, and all courtesy Brady Hartsfield, who is back to exact revenge.
In End of Watch, the last of this trilogy, Stephen King’s masterpiece takes the reader to that rarified zone; a dimension where the supernatural melts and mingles with crisp detective fiction to reveals our own fragile existence in a world by controlled fear.
Result? If you insist on calling it that is the lucky reader, who finds he is on a roller coaster, in a cat-and-mouse game that takes one on to a dizzy climax which only a writer of Stephen King’s genius can conjure.
To say more would be like showing a mirror to Everest.

Garhwal Post has established itself as a credible, balanced and forward looking newspaper in India. Based in Uttarakhand, the daily is read by the aware, socially and culturally responsible, high-income elite of society.
Contact us: info@garhwalpost.in
dating older