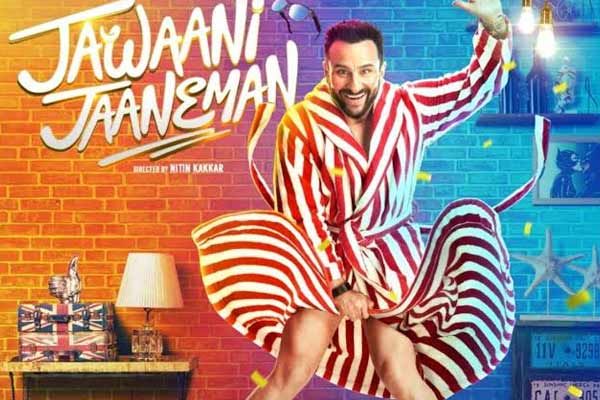 A free-spirited, 40-something man, is having a ball of a time, living all by himself, for himself, with his jazzy T shirts and infectious swag. His happiness knows no bounds. Drinking, clubbing, dating younger women, grooming himself, colouring his hair to hide his true age and posing to be young and happy is what this man does after work. He hates being a family man. His dialogues, “Family naa aadmi ko Chomu bana deti hai”, “Kya main lagta hoon unhappy married types” say everything about his exuding joy that he savours in his singlehood. Then comes a big jolt, the sky falls on him. The adrenaline junkie discovers that he has a 21 years old daughter and that she’s pregnant. She is the product of his fling with her hippie mother two decades back. The happy camper’s days are clouded with this breaking news.
Jawaani Jaaneman is charming and hilariously funny; an adaptation of a 2010 Argentine film Igualita a mi, that means ‘just like me’. It remained the highest grossing film of the year then, a story of an evolution of a middle-aged playboy who refuses to grow and his transformation into a mature father and grandfather.
The emotions of the father in him rise to the challenging moment as the harrowing news may border him, cage him! The awkwardness is captured beautifully by the director Nitin Kakkar who maintains a strong grip throughout. The film oozes with comedy till the point it runs on Saif’s quirky self and doesn’t turn preachy. It moves with a fast pace, without wasting much time in introducing the characters and their background. The seamless editing and engaging screenplay magnifies the effects. The one-word responses, brief and boisterous replies, classy punches and expressions, say it all; they keep the entertainment factor high in every frame; providing riotous moments in plenty. All kudos to Saif for delivering a flawless performance in his return into a live-wired role, maybe after Dil chahta hai or Hum Tum.
JJ is a fun trip. Every character, whether in a big or small space, remains in the skin. Saif as Jazz aka Jaswinder, living in London, working as an estate agent, in a role of a Casanova is outstanding. His sophisticated looks and immaculate comic timing gel brilliantly to make the experience memorable. He is a treat to the eyes. He fills each and every moment with awe and laughter whether it is his fresh date, or a bath tub scene or dancing to his freedom or competing with young blood over maximum shots intake or during his interactions with his daughter.
Tia (Alaya F), as Jazz’s daughter, emerges to be a promising discovery as a debutant in the role of a confident and smart girl, who longs to be part of a family. Through her role she displays maturity beyond her age against the immature father. Kubbra Sait, Saif’s hair stylist and a sensible divorced woman searching for a soul mate owns a pleasing presence while Kumud Mishra and Farida Jalal are adorable as Jazz’s brother and mother.
Tabu’s entry into Jazz’s life is like a storm entering his home through the door. She is Tia’s mother. Completely marinated in a hippie’s attire and attitude, hashish in her blood, obsessed with natural therapies and meditation, she nails it.Her dialogues are as crispy as wafers, ‘Are you sure yeh negative insaan tumhara baap hai’. To one’s astonishment she provides a third chance to her daughter for the three probable men on the list to be Tia’s father when the girl takes on the road to ‘father search’.
JJ is a wonderful film with taut direction and superb acting. Had it explored the flamboyant middle-aged man’s shock-of-the-life experience little more while delivering lessons and given a differently flavoured ending, the joy of watching would have enhanced multi fold. It ponders territory like the important role of family and friends in one’s life and sturdy bonds. I wish it could have scratched it little deeper rather than merely sprinkling few lessons here and there to garnish the film. To be specific, the last lag disappoints with its clichés and few avoidable glitches, where it dips landing on a predictable pad.
Overall, it’s a fun-filled, utterly charming film that provides sweet father-daughter moments along with the gust of merry-making attitude of not-so-young Jazz.

Garhwal Post has established itself as a credible, balanced and forward looking newspaper in India. Based in Uttarakhand, the daily is read by the aware, socially and culturally responsible, high-income elite of society.
Contact us: info@garhwalpost.in
absolutely free adult dating site