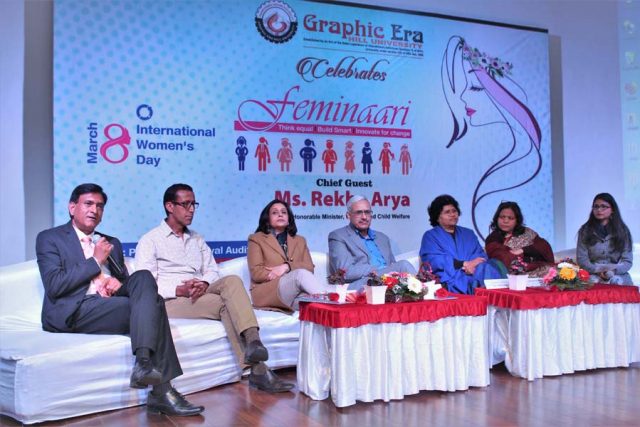 By OUR STAFF REPORTER
DEHRADUN, 08 Mar: Equal right for women need not be asked, it’s their birth right. This was the conclusion of the conclave on ‘Women Empowerment’ that took place in the Graphic Era Hill University campus, today.
The Department of  Media and Mass Communication of the university organized a conclave on the United Nation’s theme, “Think equal, build smart, Innovate for change.” Addressing the conclave, Mountaineer and Professor of Economics Dr Harshwanti Bisht said that women need not  prove themselves with physical strength, rather they should be doing things which they actually desire to do in life.
Addressing the conclave retired colonel Virender S Malik said that every individual is born free, and has the freedom to dream and inspire. He also shared the challenges of his mountaineer daughters Tashi and Nungshi. He asked every individual to break the stereotypes and learn to overcome the socio-cultural barriers.
Author Mona Verma said that it’s high time now that women should learn to raise their voice on their own. She asked the people to teach moral values to the boys also so that they become good human beings in future.
Environmentalist Dr. Kiran Rawat said that women should get equal wages for their equal work. Motivational speaker  Surendra Hali said that after few years of marriage working women develop a sense of guilt , which can be overcome only if men also start taking the responsibility of the family equally.
Vice Chancellor of Graphic Era Hill University Prof. Dr. Sanjay Jasola said that Graphic Era Hill University has more than 40%  female students and also the university is giving 10%  relaxation in fees to the girls. He also said that Graphic Era is providing equal opportunity to the girls and as a result, a girl of Graphic Era has bagged a package of 40 lakhs per annum in Adobe.
On this occasion, Head of Media and Mass communication dept Taha, Vikram, Himani, Shikha, Sandeep, Vipul, Insaaf along with the students were present.