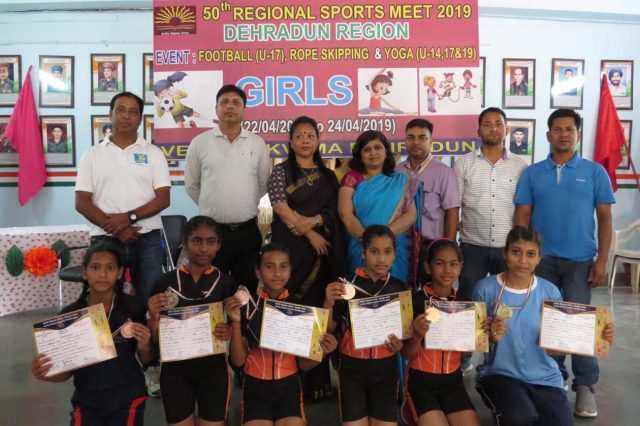 Dehradun, 24 Apr: The Football, Yoga and Rope Skipping events of the 50th KVS Regional Sports Meet 2019 concluded at KV IMA, here, today.
The meet was held under the guidance of Venue Principal Jyoti. It was not just Games and Sports, it aimed at building better students with a human outlook. The students were also judged for Cleanliness and Discipline. KV Birpur bagged first prize for Discipline and KV Pithoragarh, for Cleanliness.
In Rope Skipping, Khushi of KV Birpur (Under 14) and Urvi of KV ONGC (Under 16) bagged first position. In Yoga display, Kashish and Divya Rawat (Under 14 and 17) bagged first and second position. Sweta (Under 19) of KV IMA bagged the first position.
In Football, KV IMA emerged as the winner of the tournament. It has been selected for KVS Nationals.
The Sports Observer, Basanti Khanmpa, Coaches and Members of the Jury worked around the clock for the smooth functioning of the events. Those who contributed to the effort were SK Aman, Ajay Gosain and Bharti Tiwari
The outstanding performers of KV IMA included Arihant Pandey, who bagged the Gold medal in Chess and was selected for te Nationals. The KV IMA football girls’ team won the Gold Medal and has been selected for the Nationals. Astha Shukla bagged Silver in judo. Arbaaz Khan won Silver in the walk event. Priyanka bagged Bronze in Yoga. Santosh bagged silver and bronze in skating. Rohini won Bronze in Taekwondo. The Boys Football Team won the Silver Medal. Pranali won a gold medal in Basketball and has been selected for the Nationals. Nikita Joshi has been selected as standby player for basket ball nationals.