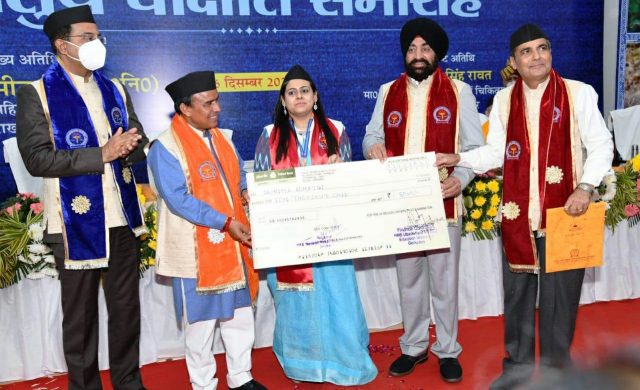 DEHRADUN, 6 Dec: Governor Lieutenant General(Retd) Gurmit Singh today appealed to the doctors to provide their services in remote areas, hill region as well in rural areas too. He said that the doctors could contribute significantly in promoting reverse migration in the state. People did not have to migrate from the hills and remote areas due to the lack of health and medical facilities in the remote and hill areas of the state. Singh was speaking as the chief guest oat the fourth Convocation of the HN Bahuguna Medical Education University in Dehradun. The Governor stated that the doctors ought to work with the spirit of selfless service and help the needy, poor, deprived, women, elderly and children on a priority basis. The Governor also observed that the telemedicine and teleradiology were no less than a boon for the hill state like Uttarakhand. Through telemedicine, the people of the remote hill regions of the state could also get the services of the country’s best hospitals and top medical experts. He called for promoting more and more telemedicine in Uttarakhand. Gurmit Singh (retired) on Monday, participated at the fourth convocation of Hemwati Nandan Bahuguna Medical Education University, Dehradun. On this occasion, the Governor presented degrees to meritorious students. On this occasion, the Governor also presented the honorary degrees to Dr JS Titayal, Dr AB Pant and DrJK Sharma. The Governor said that the gap between the requirements and actual situation in respect of the medical facilitiescould be eliminated to some extent through technology in a hillstate like Uttarakhand. Technology ought to be promoted in all the primary health centres, community health centres and government hospitals of the state. Online registration, telephonic consultancy, digitisation of records, artificial intelligence, robotics, Big Data Analytics and machine learning ought to be sincerely adopted. The Governor said that during the epidemic of Covid-19, the doctors, nurses and all paramedical staff were in the role of Health Warriors. The Health Warriors of India saved lakhs of lives. The Governor said that he bowed to the doctors and paramedical staff for this great human service. Due to these dedicated health warriors, India had succeeded in achieving more than 100 crore Vaccinations. Singh said that he wished to appeal to the the young doctors to play a leadership role for reverse migration. He said that the medical sector was constantly expanding due to the new research. The vast population benefitted from new research, and therefore more attention needed to be paid to the research. The governor said that Covid had been a new challenge for the HealthCare Sector and it continued to remain a challenge still. This epidemic showed the limits of existing medical services but the scientists and doctors fought with this challenge. New vaccines were developed in record time and one billion billion people were vaccinated. He advised the doctors while treating patients of Covid 19, they ought not ignore other dangerous diseases. The Governor also advised doctors to learn and communicate in regional languages like Garhwali, Kumaoni as that would help in better interaction with the patients. The Governor said that Covid-19 had badly influenced the education system and institutions had to switch over to online teaching. It was a new challenge and a new experience for both teachers and students. Doctors and nurses were seen in the whole world with great respect. Especially in India where they were considered as God. It was up to them to keep this trust and respect of people through their services and conduct. On this occasion, the Cabinet Minister Dr Dhan Singh Rawat, Secretary Dr Pankaj Kumar Pandey, Vice Chancellor of the HNB Medical Education University, Dr Hemchandra, Vice Chancellors of various universities and students were present.