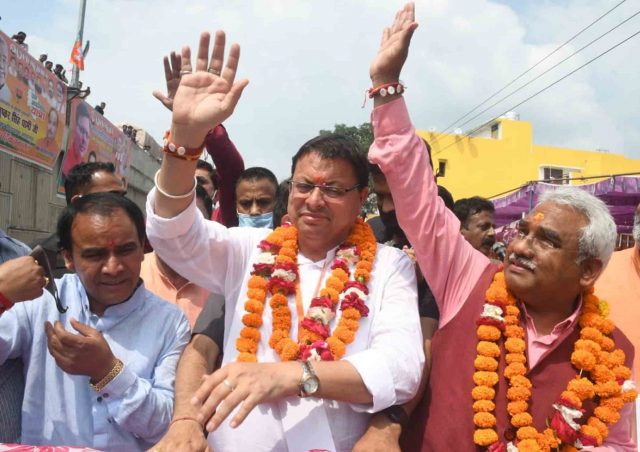 Haridwar, 20 Sep: Chief Minister Pushkar Singh Dhami participated in the Jan Ashirwad rally from Sant Ravidas Mandir, Bhagwanpur, to Makhanpur, in Haridwar district, today. On this occasion, the Chief Minister claimed that his government was working on the mantra of serving all the people of the state and was making every effort to resolve their problems at the earliest. He added that it was his endeavour to simplify the administrative process of dealing with the people’s problems so that they could be resolved at the earliest. He added that the main objective of the government was to ensure that the benefits of the government schemes reached every needy person of the state.
The CM reminded the gathering that the government had provided free cooking gas for the convenience of women; toilets were being constructed at the government’s expense for the first time in the history of independent India. Atal Ayushman cards were being made available to the general public by the government to provide health facilities, and its benefits had been extended to every section of society. The government was also committed to helping homeless persons by contributing towards construction of houses for them under the Pradhan Mantri Aawas Yojana. He said that under the Jal Jeevan Mission, water would be provided to every household of the state by the year 2022.
Dhami said that Dr BR Ambedkar had a dream that everyone got equal rights and opportunities for development. The state government was working on these lines. Instructions had been given to the officers to hold public hearings in every government office from 10 a.m. to 12 p.m. and resolve the problems of the people at the earliest. The government would be very strict in this regard and was determined to take strict action against any officials found lax in dealing with the people’s problems.
Chief Minister Dhami also reminded that the process of recruitment to vacant posts had been started in the state. All the recruitments on the vacancies would be carried out soon. No application fee would be charged for the recruitment examinations scheduled to be held before 31 March, 2022. He also claimed that the government was preparing a detailed action plan to provide self-employment to lakhs of youth. Youth were being linked with self-employment, for which camps were being held at various places. He also made several announcements regarding resolution of problems related to Haridwar district and promised that the problems regarding Bhagwanpur Industrial Area would soon be resolved.
Among those present were BJP State President Madan Kaushik, Cabinet Ministers Dr Dhan Singh Rawat and Swami Yatishwaranand, MLA, Jhabreda, Deshraj Karnwal, MLA, Roorkee, Pradeep Batra, MLA, Ranipur, Adesh Chauhan, MLA Sanjay Gupta, Subodh Rakesh, Convenor Kuldeep Kumar, and BJP District President Dr Jaipal Singh Chauhan.

Garhwal Post has established itself as a credible, balanced and forward looking newspaper in India. Based in Uttarakhand, the daily is read by the aware, socially and culturally responsible, high-income elite of society.
Contact us: info@garhwalpost.in
gay aa meeting https://garhwalpost.in/absolutely-free-hookup-sites/ https://garhwalpost.in/website-to-meet-singles/