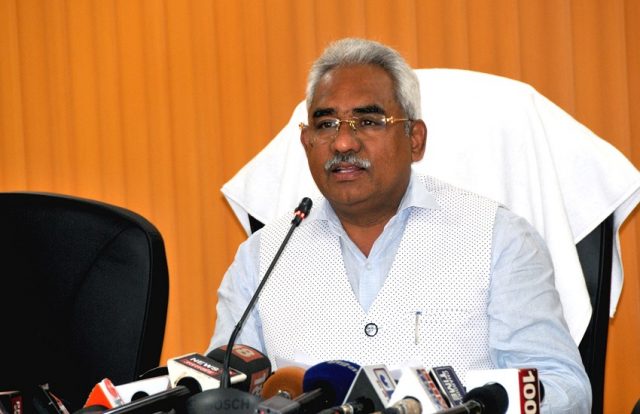 By Arun Pratap Singh
Dehradun, 23 Dec: BJP State President Madan Kaushik today targeted the Congress and said it is fighting a losing battle. Addressing a press conference at a hotel here, today, Kaushik said that while the factionalism in Congress was an internal problem of that party and it did not warrant a comment from the BJP, the internal fight had now been brought out in the open by the Congress leaders themselves. Therefore, as a political party, BJP felt justified in commenting on this. He stressed that factionalism was destroying the Congress and was an indication of the fact that the Congress leaders are not confident of winning the elections.
In response to a question, Kaushik said that, while former CM Harish Rawat claimed he was the choice of the people as the next CM, the fact remained that he was not the top choice even within the Congress. Kaushik said the people had seen Harish Rawat’s performance while he was the CM and had rejected him. Now the people would not wish that the mistake be repeated again. He further pointed out that even when Congress was in power, it was deeply divided and everyone saw how many senior Congress leaders left the party in 2016. Now, that it was out of power, the factionalism still prevails in the party.
The BJP State President alleged that Congress was never a pro-Uttarakhand party. While all other parties, big or small, had actively participated in the statehood agitation, Congress as a party had chosen to remain silent. Some Congress leaders had gone to the extent of saying that Uttarakhand would be formed over their dead bodies and some had demanded that Uttarakhand be made a union territory. When the statehood agitation gained movement in 1994, the then UP Government had ordered firing on people in Mussoorie and Khatima, but the Congress was supporting the UP government at that time. Congress never had any resolve or attachment with this state. The Congress government ended the special package given by Atal Bihari Vajpayee as Prime Minister.
The Congress worked to stop the plans of the state, Kaushik claimed, adding that Congress had also insulted the army. It had used derogatory words against CDS Bipin Rawat.
Now the Congress had failed even as an opposition party.
In response to another question whether the BJP is behind the current crisis in the Congress as alleged by certain Congress leaders, Kaushik said there is no need for the BJP to indulge in such games and that too when Congress leaders are fighting amongst themselves. Kaushik said the BJP is going before the public resolved to win. Better work had been done under the leadership of the young CM of Uttarakhand and the work was being done earnestly to provide relief to the people. It was a double engine government where the Centre under the leadership of Prime Minister Narendra Modi had granted projects and schemes worth Rs 1 lakh crores to Uttarakhand.

Yogi Adityanath to address more than 10 rallies in U’khand
By Arun Pratap Singh
Dehradun, 23 Dec: Speaking to Garhwal Post exclusively, today, BJP State President Madan Kaushik said the party planned big rallies of its star campaigners across the state. He claimed that although Prime Minister Narendra Modi had already addressed rally in Dehradun and was scheduled to address another in Haldwani later this month, he was expected to address a few more rallies in Uttarakhand once the state elections are announced. In addition, BJP President JP Nadda, Home Minister Amit Shah, Defence Minister Rajnath Singh will address several rallies in the state. When asked about UP CM Yogi Adityanath, Kaushik said the state BJP wanted at least 20 rallies of Yogi Adityanath but, nevertheless, he would be addressing at least 10 rallies in the state as he was one of the top star campaigners in top demand in Uttarakhand.
Kaushik added that, while the state BJP had submitted its choice of leaders and star campaigners, the names would soon be finalised by the Central leadership. The BJP would carpet bomb with star campaigners much in the same pattern as it had done in 2017, he indicated.
In response to another question, Kaushik said the state BJP leadership is in touch with the Central leadership on names of probable candidates and, every day, the topic is being discussed. The names would be finalised in due course by the Central Parliamentary Board.