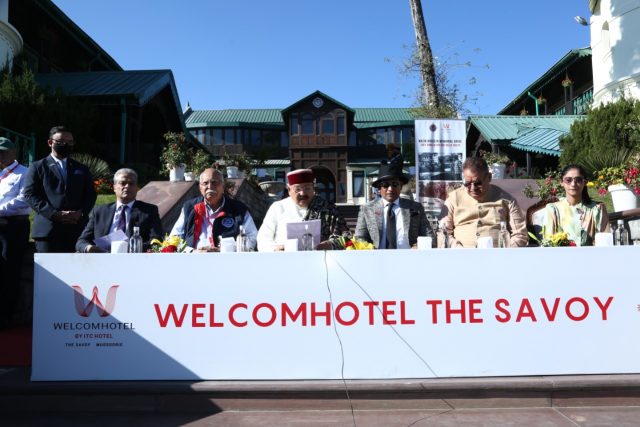 By Sunil Sonker
Mussoorie, 10 Nov: After a gap of 31 years, the Heritage Himalayan Car Rally took off from Mussoorie today. As soon as the convoy of vintage cars came out on the road, people enthusiastically gathered around to watch.
The Himalayan Car Rally was jointly flagged off by Cabinet Minister Satpal Maharaj, Sainik Welfare Minister Ganesh Joshi and Hotel Welcome the Savoy Director Kishore Kumar Kaya.
Tourism Minister Satpal Maharaj said that the Himalayan Car Rally would give another boost to tourism in the state. He said that the Himalayan Car Rally had been organised once again after four decades. People from several states of the country and abroad have also participated, which would help in strengthening the tourism and economy.
He said that the arrival of tourists in winter is comparatively less. Tourists would respond positively to these types of events. Local people would also get employment opportunities. Visitors from other partsof India and abroad would also enjoy the mountains and natural beauty of Uttarakhand. He said that the state government is planning to establish a Caravan Circuit soon in many parts of the state. Toilets are also being constructed at suitable sites.
The Minister added that people would be introduced to the folk culture of the state through Caravan camping. They would also be exposed to the rural areas and lifestyle. The delicacies prepared from the products of the mountain are also being served to the tourists. He revealed that, while preserving the old architecture of the George Everest Estate, it had been given a grand look, making it a more attractive tourist destination.
Cabinet Minister Ganesh Joshi recalled that the Himalayan Car Rally started in 1971, which was suspended due to some reasons. The car rally had now been rejuvenated, with participation from across the country. He said that the special thing about the rally was that the participants were enjoying the adventure along with the natural beauty of the state with their families. Such events encouraged tourism. There is also a cross-cultural exchange. He pointed out that the roads in all parts of the country had been improved with All Weather Roads, making it easier to hold the car rally. He reiterated the state’s commitment to promoting tourism. Adventure sports would also be encouraged. People from abroad would also be persuaded to participate.
Kishore Kumar Kaya said that he worked constantly to preserve the historic legacy of Mussoorie. This included Hotel Savoy, which had been developed with modern facilities. The programmes organised earlier in Mussoorie were being revived, which included the Himalayan Car Rally. Even before this, many conclaves had been organised at the hotel, which had boosted tourism and employment opportunities. He also praised the state government’s schemes in this regard.