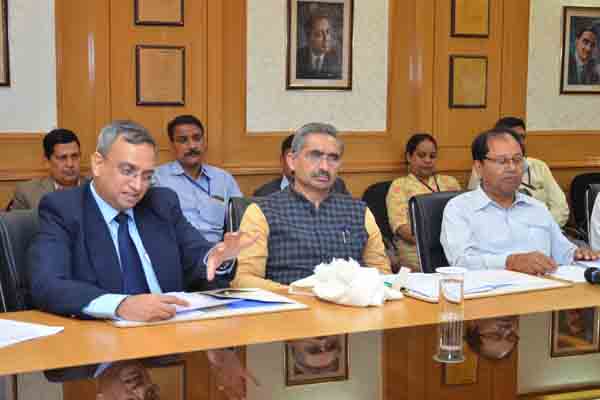 Dehradun, 31 Oct: Dr DC Pandey, Head, PED, welcomed the Chief Guest, Mayor Sunil Uniyal ‘Gama’, at a press conference held at Indian Institute of Petroleum, here, to brief media on the upcoming India International Science Festival.
He said the IISF 2019 is scheduled to be held on 5-8 November at Kolkata. The main aim to celebrate this science festival was to engage public with science and celebrate its successes. It would show how Science, Technology, Engineering and Mathematics (STEM) provide solutions to improve lives.
The Ministry of Science and Technology, the Ministry of Earth Sciences and the Ministry of Health and Family Welfare in association with Vijnana Bharati (VIBHA) have created a unique platform of the India International Science Festival which intends to inspire curiosity and make learning more rewarding.
Dr Anjan Ray, Director, CSIR-IIP, said the IISF, launched in 2015, was a celebration to promote Science and Technology and demonstrate how science could lead India towards becoming a developed nation.
He added that the media could play an important role in publicising the discoveries of science. He urged the media persons to attend the IISF 2019 and give maximum publicity to the event so that the common man could be benefited with the outcome of this festival.
Amar Kumar Jain, Chief Scientist, explained about the PNG Gas Burner developed by CSIR-IIP and more than 39 licences that have been distributed to the manufacturers around the country.
The Senior Scientists of the Institute listed the technologies developed/commercialised by CSIR-IIIP such as Bioject Fuel, Room Temperature Biodiesel Process, PNG Burner/Modified Gur Bhatti, Waste Plastic Conversion to Fuel, Sweetening Catalyst, Electric Vehicle, etc. Those present were briefed on the Government initiative taken under Jigyasa & Skill Development and also how Eco Campus is maintained at CSIR-IIP.
The scientists spoke about the technologies developed by CSIR-IIP and answered/explained to the questions raised by the press and media.
Out of the above mentioned technologies CSIR-IIP is going to showcase its four technologies, namely Room temperature biodiesel process (live demonstration), Waste plastic conversion to fuel glass model & samples, Biojet fuel samples and PNG burner to IISF 2019 at Kolkata.
Mayor Sunil Uniyal Gama appreciated the initiative taken by the CSIR-IIP regarding the single use plastic and the segregation of waste in IIP eco- campus. He also visited the waste plastic pilot plant inaugurated recently at the institute.
Dr DC Pandey proposed the vote of thanks.

Garhwal Post has established itself as a credible, balanced and forward looking newspaper in India. Based in Uttarakhand, the daily is read by the aware, socially and culturally responsible, high-income elite of society.
Contact us: info@garhwalpost.in
https://garhwalpost.in/dating-millionaire-sites/ best dating sites for over 40 australia