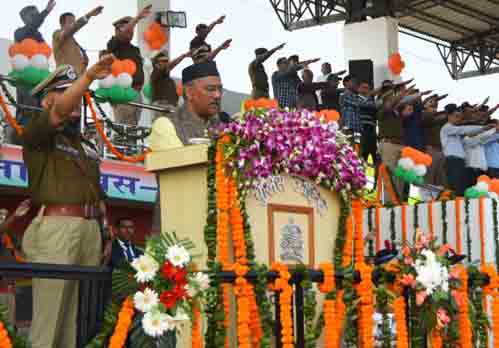 Dehradun, 31 Oct: Chief Minister TS Rawat took the salute at a parade held on he occasion of ‘National Unity Day’ at the Police Lines, here, today. He also administered the ‘National Unity Pledge’ to all present.
The Clement Town Thana was awarded on the occasion as the Best Thana. Police officers were also felicitated for good performance and successful investigations.
CM Rawat recalled the contribution of Sardar Vallabhbhai Patel, on whose birth anniversary National Unity Day is celebrated, to the successful integration of India. With this he thwarted the hope of the British to leave India divided. Rawat also praised Patel for his contribution to improving the conditions of India’s farmers.
The CM asserted that under Prime Minister Narendra Modi’s leadership, the vision of Sardar Patel of One India was being realised. The state of J&K had been provided freedom from the inequities of ‘Article 370’. He reminded the gathering that Ahmedabad had undertaken a 222 day clean-up campaign when Sardar Patel was the Mayor of the city. PM Modi had similarly exhorted Indians to get rid of single-use plastic.
The Chief Minister also paid tribute to the police personnel who were killed in the road mishap that took place near Jeolikot, Nainital. He promised all possible assistance to the families of the deceased.
DGP Anil Kumar Raturi said that Sardar Patel’s life inspired Indians to defend the unity and integrity of the nation. The Uttarakhand Police was commited to this goal.
Present on the occasion were Higher Education Minister of State Dr Dhan Singh Rawat, MP Mala Rajyalakshmi Shah, MLAs Harbans Kapoor, Khajan Das, Ganesh Joshi, Deshraj Karnwal, Umesh Sharma, Mayor Sunil Uniyal ‘Gama’, Rishikesh Mayor Anita Mamgain, ACS Radha Raturi, DGP (Law and Order) Ashok Kumar, senior police officials and members of the public.

Garhwal Post has established itself as a credible, balanced and forward looking newspaper in India. Based in Uttarakhand, the daily is read by the aware, socially and culturally responsible, high-income elite of society.
Contact us: info@garhwalpost.in
https://garhwalpost.in/best-free-dating-site-in-america/