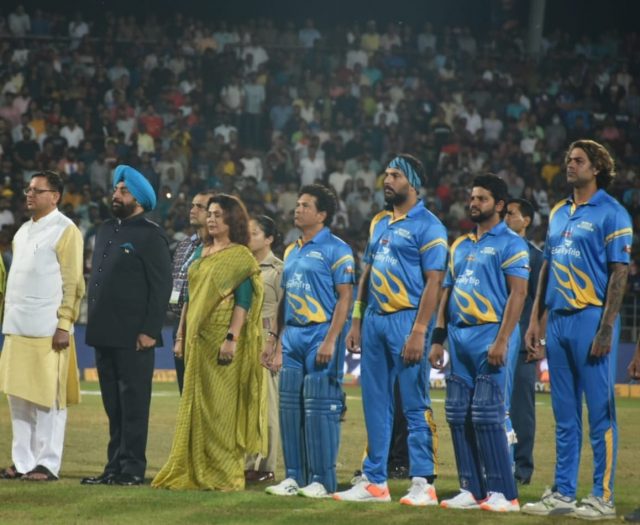 “Sachin! Sachin!” Dehradun chants the name as master blaster entertains one and all

By ICHCHHIT KIMOTHI
DEHRADUN, 22 Sept: The second season of the Road Safety World Series (RSWS) T20 league which commenced on the 10th of September reached Dehradun on the 21st of September.

While the presence of players like Yuvraj Singh, Suresh Raina, Yusuf Pathan, Irfan Pathan and others made the occasion special, it was the arrival and presence of Sachin Tendulkar that took the atmosphere of the Rajiv Gandhi International Cricket Stadium a notch above.

While Bharat Ratna awardee Sachin Tendulkar is often sighted in Doon valley every year, this was the first time that the people of Dehradun got to witness the magic of the master in his full glory.

As the raingods thankfully receded before the match began, the match was shortened to 15 overs. With people thronging to the stadium to witness Sachin, there was absolutely no disappointment for them as vintage Sachin came out to thrash the English bowlers all over the park. With 3 gorgeous looking boundaries and 3 humongous sixes, his 20 ball 40 put the Indian legends in top gear. There wasn’t a moment where it seemed that it had been nearly 9 years since Sachin had let his guard down from International cricket. With further vital contributions from Yusuf Pathan and Yuvraj Singh, the India legends posted a mammoth total of 170 runs for the fall of 5 wickets in 20 overs. Stephen Parry was the only English bowler to create an impact in the match with 3 wickets.

In reply the England Legends started on a brisk note but couldn’t carry on with wickets falling at constant intervals. Rajesh Pawar was the most successfull Indian bowler with 3 wickets. Chris Tremlett playing down the order was the only player who created an impact in the end with a quick 24 of 16 balls. England legends finished with 130 runs.

The occasion was graced by the presence of numerous personalities from the state of Uttarakhand along with political bigwigs like the Chief Minister of Uttarakhand, Pushkar Singh Dhami. Governor Lt-General Gurmit Singh (Retd) and Chief Minister Dhami arrived at the Rajiv Gandhi International Cricket Stadium in Dehradun to watch the ongoing RSWS. They reached the stadium and enjoyed the India Legends and England Legends match. Earlier, the Governor and the Chief Minister got acquainted with all the players and welcomed everyone in Devbhoomi.

Dhami said that in today’s era, it is everyone’s responsibility to follow the rules related to road safety. He said that this event would work for public awareness in this direction. He also said that this cricketing event would be helpful in promoting sports in Uttarakhand and giving recognition to Uttarakhand.

Garhwal Post has established itself as a credible, balanced and forward looking newspaper in India. Based in Uttarakhand, the daily is read by the aware, socially and culturally responsible, high-income elite of society.
Contact us: info@garhwalpost.in
meetup bedford black dating website free https://garhwalpost.in/best-dating-app/