These few days, starting from the tragedy of Pulwama till the return of our brave heart and lucky air force officer, we in this nation went through a lot of mood changes from morose-fearful-livid-vengeful-expectant-despair and euphoric. It is mostly because of the ease of communication now available in the country. But, unconsciously, we were carried through the days by our relentless and unbridled competitive media. This unhealthy frenzy generated by TV and some news journals has brought out the vulnerability of our common people to acts of irrationality and mass hysteria.
Social media like WhatsApp, Twitter and Facebook added to the confusion and chaos so much so that a person on the street started demanding revenge and war or even resignation from the government. Some of our street bred political leaders even started making unethical and immature statements to arouse the public. The opposition termed it all as electioneering stunts. Only a few sane comments and statements ensued which could not have much affect due to the deluge of photo morphed and doctored social media misinformation.
At the Wagah post, due to the stretched waiting to receive our downed IAF pilot, some unscrupulous youth even carried their favourite party flag instead of the national standard.
I feel our reactions and display of patriotism on the TV with all the shouting, in social media churning out doctored and photo shopped videos and at the Wagah border post with bursting crackers unmindful of pollution was very vulgar. We even received, through YouTube app, some highly misleading videos clips saying that the Pakistan PM had been assaulted at night and that Pakistan had now changed its mind to return our Pilot. These were removed within hours of appearing. Instead, the episode could have been dealt with sober aplomb, decent original videos and flowers, garlands, bouquets and colourful artistically done banners that demonstrated a more mature civic attitude. Perhaps, in our people’s minds, the notion of valour-elections-national pride has all got mixed up and such violent occurrences give vent to their own suppressed frustrations and deeply ingrained prejudices.
As a very ancient and superior culture we must give credit to whom and where it is due. To our military, our government, the world societies and even to our enemy. Remember how Sri Ram made his brother, Laxman, pay respect and receive ‘gyan’ from Ravana at his death. It is time that a strict code of conduct is imposed on all kinds of unbridled media in our country. 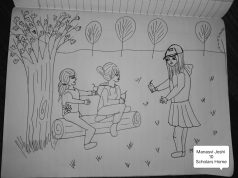