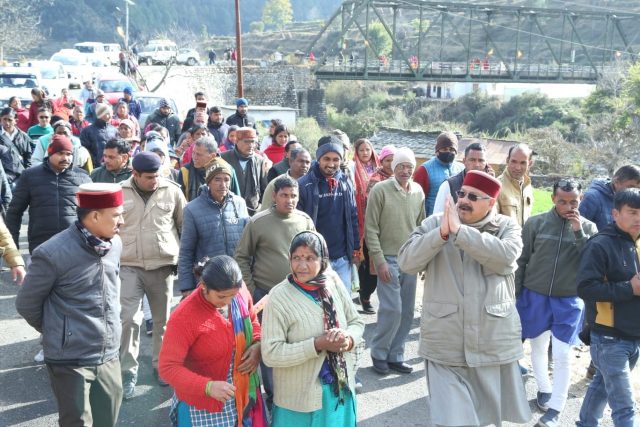 By Our Staff Reporter
Bironkhal (Pauri)/Dehradun, 29 Dec: Tourism and PWD Minister Satpal Maharaj said today that some MPs from Jammu and Kashmir used to say in Parliament that rivers of blood would flow if Article 370 was removed by the Modi Government. Nothing of that sort happened when Article 370 was removed by the BJP Government led by Prime Minister Narendra Modi, as the people of the state were happy with it.
Maharaj was addressing a gathering here, today, on the occasion of the opening of the District Cooperative Bank in Rasiya Mahadev, Bironkhal Block.
Maharaj said that, with the opening of new branch of the District Cooperative Bank, here, the residents of the area would benefit. He said that the BJP Government at the Centre and the BJP Government in the State were changing the public perspective about governance. The Modi Government was ensuring rapid development, good economic progress and some crucial decisions in the national interest like removal of Article 370 in Jammu & Kashmir. He reminded that, in the past, there used to be two Prime Ministers in India, one the prime minister of the country and the other the prime minister of Jammu & Kashmir. Over time, the PM of Kashmir went on to be called the Chief Minister but this was more a cosmetic change. With the removal of Article 370, the UT had been firmly integrated with the rest of the country. When the BJP government decided that Article 370 had to be removed from Jammu and Kashmir, Prime Minister Narendra Modi and Home Minister Amit Shah took the immediate decision and abolished it in one stroke. The people of Jammu and Kashmir gave full support and the plans of those who worked for anti-India forces were dashed. Now, the Panchayat Act had also come into force there. Any person of the country was free to do his business there. Now, India needs to take back the share that has been occupied by Pakistan.
Congratulating the people of the area for construction of the Gurinda Sampark Marg from MLA-LAD funds of his constituency, Maharaj said that the work on this road has begun on the occasion of Amrit Mahotsav. This would establish connectivity to the villages easier and the area would also develop.
Present on this occasion were Mukesh Pokhriyal, Om Pal, Darshan Singh Danu, Shakti Kendra President Jagat Singh Chaudhary, Sumitra Devi, Dilwar Singh, Dilip Singh Jotsingh, Yashwant Singh, Dansingh, Kuwar Singh, Kritesh, Sanjay Singh, Mahendra Tripathi, Durgesh, Sunita Devi and Deep Singh.

Garhwal Post has established itself as a credible, balanced and forward looking newspaper in India. Based in Uttarakhand, the daily is read by the aware, socially and culturally responsible, high-income elite of society.
Contact us: info@garhwalpost.in
https://garhwalpost.in/backpages-hookups/