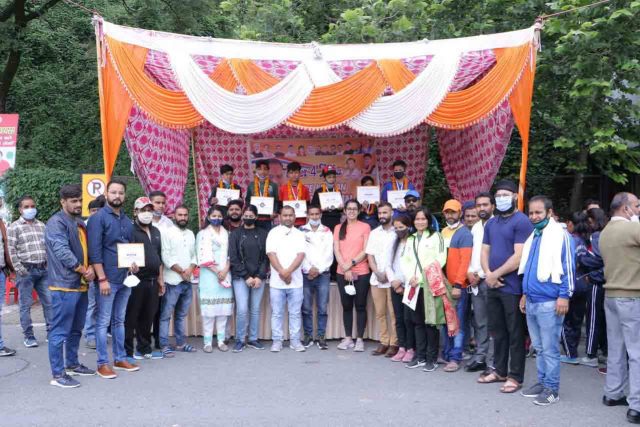 By OUR STAFF REPORTER
Mussoorie, 3 Aug: Cabinet Minister Ganesh Joshi participated as the Chief Guest in a ‘Cheers for India’ programme organised by the BJP Yuva Morcha, here, on Tuesday.
In order to encourage the Indian team at the Tokyo Olympics, a cross country running competition was organised by the Mussoorie BJP Yuva Morcha. He also felicitated the teachers of the winners. He said sports should be played on daily basis. Running does not require any resources or money. He wished all the participants and winners the best.
He announced that the Survey of India ground, which was closed due to Corona, would be opened as well as a sports stadium would be developed in Mussoorie.
In the Boys’ category, Rajit of Kendriya Vidyalaya got first position in the cross country run, while Himanshu Sajwan of Happy Valley got second position. Rajat Rangad of Kendriya Vidyalaya was third. In Open Girls’ category, Ganga Singhal got first position, and Kiran Ramola, the 2nd place.
Present on this occasion were BJP Yuva Morcha National Vice President Neha Joshi, Mussoorie BJP Yuva Morcha President Amit Panwar, Mussoorie BJP President Mohan Petwal, General Secretary Kushal Rana, BJP Yuva Morcha Vice President Mukesh Negi, Abhilash, Anil Singh (Annu), Pushpa Padiyar, Sapna Sharma, Ajay Sodiyal, Kiran Thapa and others.