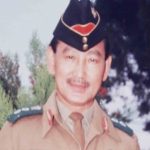 This is a rare sunset that occurs only in Switzerland…or in India, and that also in our very own hills of Mussoorie. The sun going down into the blue-black depth of the Doon Valley, immediately below a horizontal line of bright light of red/crimson hue, is indeed a rare sight. The horizon so created is one of nature’s rare wonders, and, so straight, that it appears as if a student drew the line with precise measurements, to divide the western sky in two distinct colours of golden bright and dark blue-black. Above the line, everything is visible while immediately below is pitch dark.

Of course, many of us have seen it and often, but the desire to see it yet again is an endless experience. Why I am saying so is because the time to view the phenomenon has just arrived. It is still slightly weak but promises to grow richer as winter advances. (I broke from my lockdown drill and took a ride to spend the last few days at my hut in Kiyarkuli, Hathipaon Road, to see how it was developing, literally sitting on my door steps).

And when it does, come December – January, it surely is a glorious sight. We are told that it occurs due to refraction of the Sun’s rays at certain angles and we are further told that there has to be a deep and wide valley across a hill, for such a line to be made. The books say that it forms when the warm air from the valley rises up and meets the atmosphere’s cool air.

But let’s leave the books and science, aside, otherwise the beauteous wonder may start losing its charm. Enjoy the scene and consider how lucky we are to be sitting right in its laps. The entire Doon valley is shrouded in inky blue depths and you see nothing but the Winterline, extending far to the South-West in as straight a line as an arrow. And, disregarding the threats of Corona, tourists have started crowding the Hathipaon Road (and besides spoiling one’s solitary walks), are going ga-ga watching the phenomenal sunset while clicking their cameras endlessly. The ‘Line’ starts forming about half an hour before sunset and dissipates soon after; so, if one wants to view the phenomena, the timing has to be kept in mind. But, besides the sunset itself, the scene immediately after, is equally enchanting, if not more.

The sunset at Mount Abu in Rajasthan is one of their major tourist attractions and, though it is wondrous in its own ways, the one from our Mussoorie is more unique. But, while they have arrangements for viewing and collect good revenue, ours is magnanimously unmentioned and doesn’t receive the kind of development as it deserves, to promote tourism.

And of course…if we are to talk about ‘sunrise’, then Darjeeling is the place to go. You have to reach the Tiger Hill view point by 4 a.m. and one can see the Sun God emerging from the thick clouds in absolute majestic glory…casting its golden rays on Kanchenjunga…a never to be forgotten experience, and the State’s arrangement for its promotion is unique)…but that is for some-other time.