By Arun Pratap Singh
Dehradun, 12 Jan: Chief Minister Pushkar Singh Dhami today asserted that the lapse in the security of Prime Minister Narendra Modi in Punjab, recently, was a deliberate conspiracy. Addressing a press conference in a hotel here, today, Dhami cited a viral sting operation that allegedly showed a conversation with a Punjab Police official which proved that senior Police and Administration officers of Punjab deliberately ignored the inputs being sent to them by the local CID and police officers about the possibility of the PM’s convoy being obstructed. Dhami said that the sting operation had been telecast by a private news channel of national importance. The CM blamed the Congress leadership for the conspiracy and also condemned the statements of Punjab CM Channi, Punjab PCC Chief Navjot Singh Sidhu and Veteran Congress leader Harish Rawat, who had claimed that the lapse was nothing but drama by the PM. 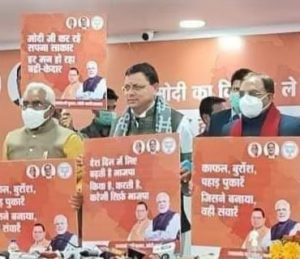 Dhami welcomed the Supreme Court probe into the lapse and also stressed that the sting operation proved what had all along been stated by the BJP, that local police was hobnobbing with and having tea with the so called protesters who had obstructed the way of Prime Minister Narendra Modi. There was now evidence available to show that the senior government and police officers were deliberately ignoring the information being given to them by the police and local administration on the PM’s security plan and the actual situation on the ground. This was a very condemnable episode, emphasised Dhami. He added that the incident had shown that, in their hatred towards one person and one party, the Congress leadership had started acting against the national interests and was even toeing the line of countries like China and Pakistan. Congress leaders abused the Army Chief, questioned the Balakot strike and toed the Pakistan line on the Pulwama terror incident. Now they were declaring the incident involving the PM as drama by the BJP though facts indicated otherwise. He sought to remind them that Prime Minister belonged to the whole country and not just one party.
Dhami also cited various achievements of the BJP State Government in the past five years and said that the party is committed to taking the state rapidly ahead on the road of development and make it a leading state by the year 2025. He said that those who could claim no development work done during their term were questioning the achievements of the BJP Government. Those who lived in glass houses did not have the right to throw stones at other houses. He said that the double engine government in Uttarakhand had ensured so many projects in the state that many people thought were not possible. Dhami cited the All Weather Char Dham Road project, Rishikesh-Karnaprayag Railway Project that would be completed by 2024, and approval of survey for the Tanakpur-Bageshwar Railway Line, reconstruction of Kedarnath Dham, initiating recruitment on 24,000 odd vacancies in various departments in the state, welfare projects, self employment grants, etc. He said that the Government of India and the State Government together had tried to provide the benefits of all the schemes to the person standing last in the queue and stressed that the BJP would be contesting the polls on the issue of development.
In response to a question, the Chief Minister said that the earlier CM had taken a decision on the Devasthanam Board with good intentions. His government had dissolved the Board in view of the situation and after due consultations by taking everyone on board. He claimed that though 3 persons had been given the responsibility of Chief Ministership in past 5 years, it was merely a change of faces, and the work and the policies remained same. It was one BJP Government during all this time. He said that based on the exercise which had been undertaken by his predecessors, the final division of pending assets between UP and Uttarakhand could be achieved during his tenure. He thanked his predecessors, senior government officers as well as UP CM Yogi Adityanath for this. He claimed that the BJP would win the elections based on its performance during the past 5 years.
Present at the press conference, along with Chief Minister Dhami, were former Chief Minister Ramesh Pokhriyal ‘Nishank’, former Chief Minister Trivendra Singh Rawat, former Chief Minister Tirath Singh Rawat and State President Madan Kaushik. During the press conference, senior BJP leaders also released the new slogans of their party for the current elections.

Garhwal Post has established itself as a credible, balanced and forward looking newspaper in India. Based in Uttarakhand, the daily is read by the aware, socially and culturally responsible, high-income elite of society.
Contact us: info@garhwalpost.in
gay black hook ups catchy headlines for dating sites