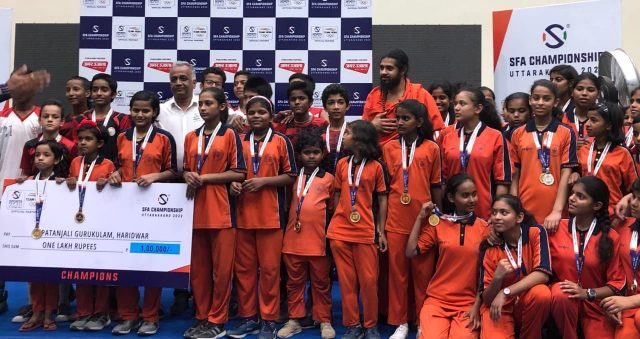 Dehradun, 15 May: Patanjali Gurukulam, Haridwar, with 571 points, was crowned Best School in the ‘Sports For All Championship, Uttarakhand 2022’ at the prize distribution ceremony held at the Parade Ground Multipurpose Hall here on Sunday.
After a neck-to-neck fight in the final moments, Maharana Pratap Sports College took home the runners-up trophy with 287 points and 34 gold medals and Social Baluni Public School were declared the second runners-up, having accumulated 287 points with 32 gold medals.
Special titles of ‘Golden Boy and ‘Golden Girl’ were given to the athletes who won most number of medals over the course of the Championship. Three boys of Patanjali Gurukulam, Ankit, Aditya Raj and Vishwas Raj, and The Sapience School’s Sujal Singh were awarded the prestigious title in the boys’ category, thanks to their twin gold medals. While, among the girls, it was Him Jyoti School’s Riya Rawat who pulled off the splendid feat of collecting 3 gold medals in Football, Kabaddi and 800m sprint.
Later, at the grand prize distribution ceremony, Patanjali Gurukulam took home the Best School Trophy and was cheered on by their 100+ strong contingent. The Haridwar-based school swept most of their medals in Wrestling, Boxing and Yogasana.
Runners-up Maharana Pratap Sports College had swept the Athletics event conducted on the first two days of the SFA Championship, and Social Baluni Public School collected most of their medals in Shooting and Fencing.
The final day of the SFA Championship, Uttarakhand 2022, witnessed a lot of excitement and energy as the final clashes of 8 sports were concluded over 2 venues in the city.
Earlier, at the Parade Ground Multipurpose Hall, in the girls’ under-15 doubles final of the Table Tennis event, Stuti Kukreti and Hanshika Dhodiyan of Summer Valley School beat Shivani Rana and Vaishnavi Methil of Him Jyoti School 3-0 (11-8, 11-9, 11-2). Later, in the girls’ under-19 doubles match, Jiya Badri and Yashasvi Bhatt of Summer Valley School beat Ankita Rawat and Astha Bisht of Him Jyoti School 3-1 (11-4, 11-8, 9-11, 11-1).
Meanwhile, in the boys’ under-19 Badminton final, Sambhav Soni of DSB International Public School beat Udai Kukreja of Summer Valley School 2-0 (21-15, 21-19) and took home the gold medal. Similarly, in the girls’ under-19 final match, Anusha Misra of Tula’s International School beat Him Jyoti School’s Shruti Negi 2-0 (21-9, 21-5).