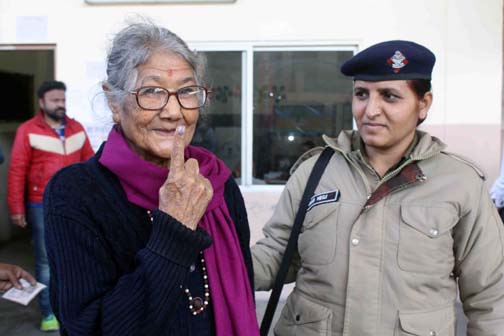 Dehradun, 18 Nov: Polling for the municipal polls in 84 local urban bodies across Uttarakhand was generally peaceful but moderate. Till 5 pm, about 60 percent polling on average basis was reported in the state, even as there were queues of voters waiting for their turn outside the polling centres inside many polling stations as the stipulated time for the polling came to end at 5 pm.

Sources in the State Election Commission and the polling officials claimed that the average final percentage of polling was likely to go up to 65 percent. In Dehradun district, 56.79 percent average polling was reported till 4 p.m. and the final figure is likely to go beyond 60 percent. For Dehradun Nagar Nigam, the turnout was very moderate as only 48 percent of voters had exercised their franchise till 4 p.m., while 55 percent polling was reported in Doiwala Town Area, 56.12 % in Rishikesh Nagar Nigam, 61.5 percent in Mussoorie Municipal Council, 59 percent in Vikasnagar Town Area and 61 percent in Herbertpur till 4 p.m.

It may be recalled that polling was conducted in 7 Municipal Corporations (Nagar Nigams), 39 Municipal Councils and 38 Town areas. There are a total of 92 Urban local bodies in the state, but polls were held in 84 of them. Notification for those remaining is yet to be issued.

Polling was generally peaceful but sporadic incidents of scuffles and arguments between supporters of different candidates were reported from a few places in the state. It was a day when some rumours were also seen floating around. One such rumour went viral about an attack on AAP’s mayoral candidate Rajni Rawat, which created panic in the Dehradun polling machinery. DM cum District Election Officer Murugesan and the SSP rushed to the spot only to discover that this was merely a rumour. Some other minor incidents were also reported at Majra in Dehradun and a few other places in the state, but there was no serious case of obstruction or violence from anywhere. It may be recalled that around 10,000 police personnel, 4,000 home guards, 2,000 PRD jawans and 25 companies of Provincial Armed Constabulary (PAC) were deployed in the urban areas to ensure peaceful polling.

Chief Minister Trivendra Singh Rawat and Mayoral candidates Dinesh Agarwal of Congress, Sunil Uniyal Gama of BJP and Rajni Rawat of AAP were among those who exercised their franchise in Dehradun city. It is for the first time that poll is being conducted in 100 wards in Dehradun after the expansion of municipal area of Dehradun.

At most polling centres, there were complaints of missing names of voters. This was particularly so in new wards and those split as a result of fresh demarcations of wards.

As polling wound up, the political space heated up with contesting parties making claims on having received resounding public support. The truth, however, will become known on 20 November, when counting is to take place. Voting this time took place by paper ballot. As a result, the results will take time to come in.