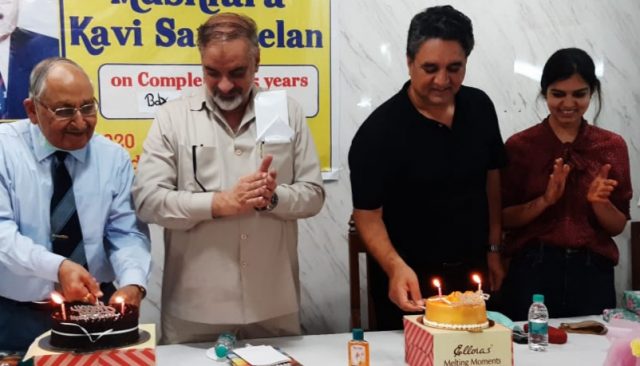 By OUR STAFF REPORTER
DEHRADUN, 26 Aug: In a gathering of poets held at 1, Inder Road, all wore masks and maintained social distancing, poems were recited and Brig KG Behl was felicitated on completing 85 years on 24 August. Satish Sharma, Editor, Garhwal Post, was also felicitated on his 50th birthday, which fell on 22 August.
Dr S Farooq was the Chief Guest on the occasion and the prominent persons present included Aishwarya Sharma, Dr MS Ansari, Dr Aditya Arya, Dr IP Saxena, Dr Pandey, Chandragupt Vikram and others. Bouquets and gifts were presented, and birthday cakes were cut. Dr Farooq wished both of them good health, happiness and further success in life.
The noted poets who recited their poems, which were crisp and to the point, and loudly applauded, included Amar Kharbanda, Inam Ramzi, Shohar Jalalabadi, Jasbir Haldar, Imtiyaz Hussain, Tammana Khan, Aanchal Arora and Rais Figar.
Satish Sharma thanked the organisers and all present and recited a ‘sher’. Brig Behl recited a poem on popular demand, which he had written on 15 August, 2020; and also a poem in Punjabi penned on the first day when he reached Ladakh in 1964. He thanked all for the honour. RK Bakshi proposed the vote of thanks.
The function was conducted by Inam Ramzi on behalf of Urdu Academy and Tasmia Academy.