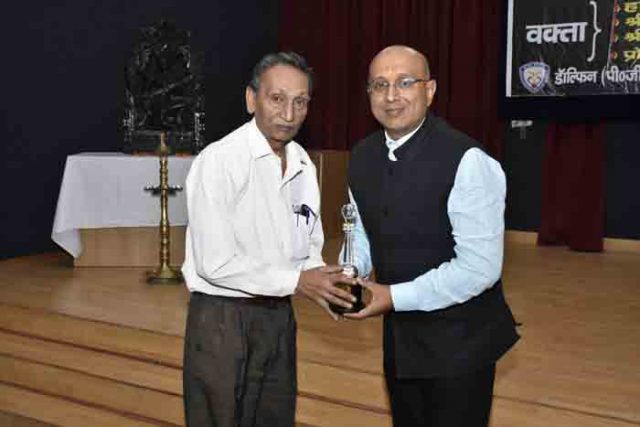 Dehradun, 21 Aug: Dolphin (PG) Institute of Biomedical & Natural Sciences organised a one day ‘Samwad’ programme on ‘Unity in Diversity’ in its premises. The programme was organised under the aegis of Dolphin Students’ Welfare Society to develop conceptual understanding between the students, staff and faculty members. The intent is that they will spread the message in society among the different religions, castes and communities.
Renowned intellectuals talked to the students, staff and faculty members of the institute on the subject.
The programme began with lamp lightning by the invited guests before the statue of Devi Saraswati. Institute Chairman Arvind Gupta welcomed all the guests and talked in brief about the objectives and guidelines of the Seminar.
Manish, a student of the Department of Physiotherapy, sang a melodious song, “Teri Mitti Me Mil Janwa, Gul Ban Ke Khil Janwa…”. Suhani and group presented a dance to the song “Maa Tujhe Salaam…”, which was praised by one and all.
Renowned Psychologist Dr Mukul Sharma described the psychological view of the topic, “Unity in Diversity”. He said that unity in diversity was the speciality of Indian culture. He quoted many examples of Indians’ day to day activities which represented Indian ethics and the high values of Indian citizenship.
Retired Professor of Urdu from Jaipur University, Dr Firoz Ahmed said that all should be aware while reading History because it had many good things, as well as bad, too. He advised learning from the good ones and leaving the bad one to move forward. He appealed to the students to live in the present and not to force others to follow their thoughts, habits, diet and other things. It was a requirement of the time to understand others with love and belief. He described the difference between global Islam and Indian Islam. The latter had much diversity like Sufism, Urdu and other things that brought it closer to other Indian religions like Hinduism, Sikhism, Christianity, Buddhism, etc.
Leader of the Rashtriya Muslim Ekta Manch of the RSS, Tushar Kant appealed to the students to rise above Caste, Religion, Language, State, attie and food habits for the development of the country. He gave many of examples from ancient Hindu, Islamic and Buddhist religious books that were written thousands of years ago, in which India was presented as a holy, powerful and rich country.
Poet Uma Sisodia recited a number of her poems related to national integration. The Deputy Registrar of the Uttarakhand Madrassa Education Board Haji Akhlak Ahmad Ansari said people were known as Hindu, Muslim, Sikh, Christian, Tamil, Marathi, etc., but inside all were Indians. This was the only reality that united everybody.
In the valedictory session, Chairman Arvind Gupta said India is a country full of diversity, and it is the also its strength. The programme was anchored and coordinated by Dr Ashish Raturi, HOD, Physics Department. Present on the occasion were Principal Dr Shailja Pant, Dean, DSW, Vipul Garg, Coordinator, IQAC, Dr Shruti Sharma, Head, Zoology, Dr Beena Joshi Bhatt, Head, Physiotherapy, Dr Deepti Warikoo, Head, Agriculture, Dr CS Pandey, Controller of Examination Dr Sanjay Agarwal, Prerna Bahuguna, RSS Nagar Pracharak Himanshu Agarwal along with faculty, staff and students.