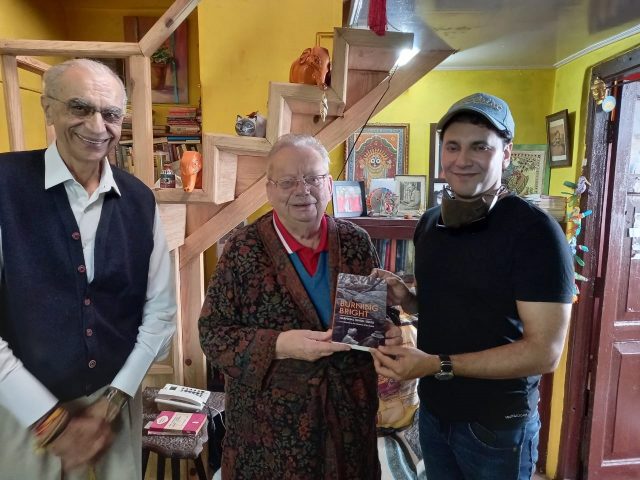 By OUR STAFF REPORTER
DEHRADUN, 24 Jul: On the eve of the 145th birth anniversary of Jim Corbett, the legendary conservationist, Ruskin Bond, India’s most loved author released a new book “Burning Bright” by Harnihal Singh Sidhu, and published by Natraj Publishers, Dehradun. The book is a novel based on the adventures of Jim Corbett that closely follows Corbett’s career, not only in the jungle but also his years working with the Indian Railways, as well as his experiences in Europe during  World War I.
While interacting with Harnihal Singh Sidhu in his cottage in Mussoorie, after the release, Ruskin Bond said, he had dipped into the book and learnt so much about good old Jim, which he did not know earlier. He complimented the author on his painstaking research and expressed the hope that fans and admirers of Corbett across the globe will enjoy the book.
“Jim Corbett, better known as Carpet Sahib, amongst the simple hill folks of Kumaon and Garhwal, was not only a saviour, destroying man-eating tigers and leopards, but also an icon who helped them during famines and epidemics. He was respected as a demigod. Jim, later in life, was one of the first to promote conservation of wildlife in India by lecturing and writing about his experiences.