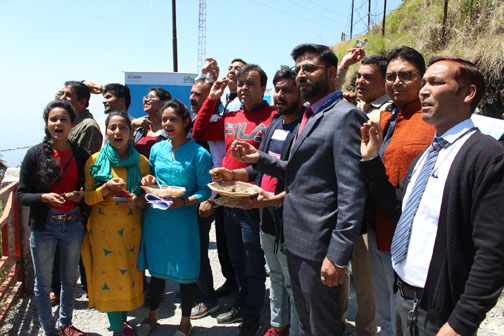 By Sunil Sonker
Mussoorie, 22 Apr: On World Earth Day, today, a unique campaign was begun called ‘Pheko Magar Pyaar Se’ under the Hilldaari Campaign. The celebration involved  throwing 1500 ‘Beej Balls’ containing seeds of indigenous and endangered plants like Bamboo, Raisin, Deodar and local varieties of pulses.
The campaign was inaugurated by DFO, Mussoorie, Kehkashan Naseem, by throwing the seeds ball into the forest nearby Camel’s Back Road. The activity was carried out by more than 150 participants representing various government departments and banks employees by throwing seed balls into the forest while raising the slogan, ‘Mai Hun Hilldaar’.
Arvind Shukla, project manager of Hildaari, said that the activity was carried out to develop a sense of responsibility among the citizens of Mussoorie and urge them not to throw waste (but seed balls) into the valley. He said that the purpose of Earth Day established by the United Nations was to make people aware of the damage to the environment.
DFO Kehkashan Naseem appreciated the people associated with the Hildaari movement and said that this campaign would help in making Mussoorie beautiful and green. She said that the old trend of throwing seeds in the hills began after the First World War. She said the seed balls thrown on the hillsides would grow and after some years they would turn into trees preserving the environment.
General Secretary of the Mussoorie Traders’ Association Jagjit Kukreja and other people said that under the Hildaari mass movement, they would try their best to support the movement to preserve the forest and environment.