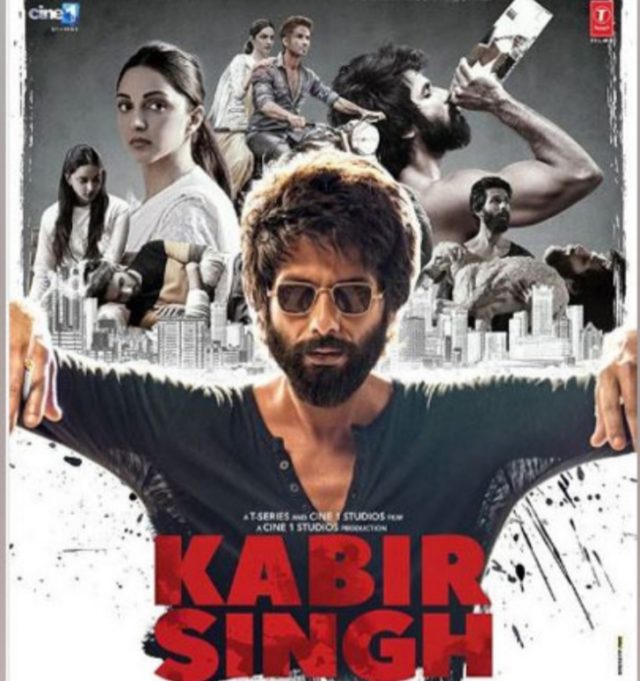 Kabir Singh Kabir Singh is an official remake of Telugu hit film Arjun Reddy, an eyebrow–raising story of a drunkard surgeon who knows and owns no boundaries in life and love. Kabir Singh (Shahid Kapoor) is a high-headed genius medico with serious anger management issues whose vulnerability surfaces when he falls in love with a fresher and on losing her, he goes on a self-destructive path. The character, Kabir Singh is flawed. Although he is the topper of his batch, a football champion but he picks up fights at the drop of a hat. He is arrogant, aggressive, a bully and a free-spirited individual. He is most uncomfortable on hearing a ‘No’. Girls find him alluring. His attractive, and arguably toxic, masculinity is shown to be beguiling. But, the different shades of his overbearing personality are unpredictable. The ill-tempered brute within him shows up at slightest of provocation. His rashness is introduced when he falls in love with Preeti (Kiara Advani) and kisses her on the very first meeting in the college courtyard. He marks her for himself. ‘Yeh meri bandi hai’. Deeply problematic and we wonder if #MeToo stood for nothing that we still have movies casually tossing up knotty stereotypes. The strange part is that the girl surrenders expressionlessly, only speaking for the first time after fifty minutes into the movie, ‘What do you like in me?’ and he says, ‘your breath’. Yes, we are in Kabir Singh’s zone where only he has the right to do all sordid things that may not be acceptable in society, with no challenges. Kabir belongs to a reputed, wealthy family. His impeccable English and contemporary palatable dialogues are relishing. Whatever he speaks, bad or good, both have a delectable charm and Shahid sails in the murkiness of his state with utmost genuineness. Kabir’s faulty character gives enough reasons to women to hate him for the spread of misogynistic noxiousness throughout the running of the film. He chases the hell out of his maid when she breaks a glass; he almost tries to rape a girl at gun point; he asks a famous actress (his patient) to help him physically; his gesture to remove his pants to shoo away a nurse in the dressing room is profoundly offending; he ruthlessly knocks back Preeti, slapping her when she begs him to calm down while giving her six hours ultimatum to fix things (although he is the one who loves her too, to the moon and back); all emphasising his uncontrollable urges, anger, and eagerness. Being a loser in love is unacceptable to him, he turns volatile and enters a self-harming zone. The director, Sandeep Reddy Vanga, brings alive an unconventional character whose rustic passion towards his profession and love is astonishing. He is into all scandalous deeds like womanising, drugs, weed, casual sex and uncontrollable drinking. He performs an emergency surgery under the spell of cocaine but no harm accrues to the patient; a shot underlining his professional credentials in a strange way. While Preeti remains submissive and goes with the flow that Kabir creates for her, whether it is to forcibly pick her up from class, or shifting her in boy’s hostel or making a chubby fat girl to be friends with her. He owns her, is in full control of her, whether it is her studies, or recovering from an injury or managing her pallu. Preeti is a docile girl at first who madly loves the insanity of this man who self-proclaims to be her saviour, mentor, and protector. However, she evolves with time and grows confident. The chemistry between the two is heartfelt but not at par with that displayed in Arjun Reddy. Shahid remains the hands-down star of the film. Nowhere does he falter or fumble or furnish a reason to shift his focus from the core inexorable Kabir; a man who is unpredictable and yet so accurate, who blatantly challenges everything that opposes his views. The background score is pleasing and adds to the impassionate atmosphere required in the film at various junctures. The music director knows where to add which note, high pitched or sombre to embellish the emotions. Kabir’s wildness is unreined and creates melancholia. This man needs a corrective therapy! His ill-tempered demeanour, resorting to foul-language and being physical when things do not go his way is questionable but the people surrounding him love him unconditionally. The handpicked support cast for the respective jobs is admirable. His friend Shiva (Soham Majumdar) stays with him like a shadow through all his ill and muck. Soham deserves an applauding mention. He even offers to marry his sister to Kabir after seeing him drowning in life (a highly unacceptable offer and definitely not for Shiva to make). Whether it is Kabir’s supportive brother (Arjan Bajwa) or his elegant and understanding grandmother (Kamini Kaushal), all add to build up Kabir’s role. It would not be wrong to expect that no one tries to amend his personality, rather they accept him at all fronts. Maybe, this is what blows his wildness out of proportion. Kabir’s demeanour will be hated for his uncustomary lifestyle and ‘I-don’t-give-a-damn-attitude’ but Shahid will be loved for bringing alive an alcoholic and drugs-drowned fine surgeon, who’s a loser, albeit intense, lover. The rashness and haste in everything he does is polarising whether it’s love or explaining the juniors his rules, or giving a piece of his mind as a ‘rebel for a cause’ to the Dean or explaining the pre-surgical procedure to the patient; not even once is he seen wobbling. The role of this irrational man flows freely in his veins from beginning to end. Amidst Kabir Singh’s untenable swag, eruptive angst and feral behaviour, the brilliant actor in Shahid shines; the turbulence in the personality portrayed with superlative skills. It’s a worth an experience.