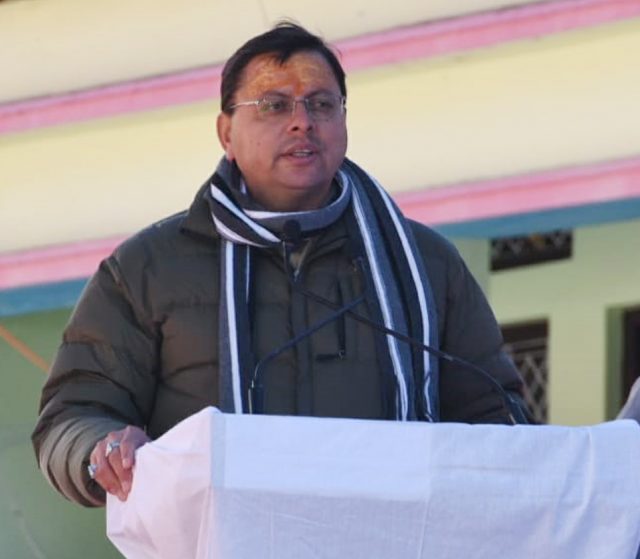 By Our Staff Reporter
Dehradun, 5 Nov: Chief Minister Pushkar Singh Dhami, while speaking at Kedarnath in the presence of Prime Minister Narendra Modi, today, said that the Prime Minister had a special attachment for the Himalayas and the temples located here. Dhami added that, whether travelling to Kailash Mansarovar or doing penance and meditation in Kedarpuri, Modi had always received an infinite spiritual divine energy from this land, which had given him the power to work for the overall welfare of India.

Dhami also praised the Prime Minister for the special attention being paid by him towards the development of Uttarakhand.
The CM said that today would be written in golden letters in the history of Indian culture and Sanatan Dharma. He said that under the direction of Modi, while works worth Rs 225 crores of the first phase had already been completed in Kedarpuri, works worth Rs 184 crores were in progress in the second phase. Along with this, for the master plan of Badrinath Dham, an amount of Rs 245 crore had been approved by the Centre. Works worth crores of rupees had also been approved for Gangotri and Yamunotri. This was proof that whatever the Prime Minister said, and thought, he ultimately ensured. 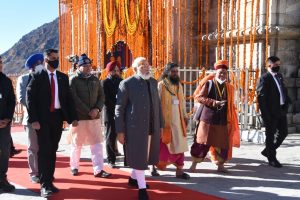 The Chief Minister said that under the leadership of the Prime Minister, the honour, respect, self-respect for India and Indian culture was increasing all over the world. India was getting ready to be again hold the chair of Vishwa Guru. The tasks which once seemed impossible in the country were now being actualised rapidly. Whether it was the issue of Ram Mandir, of Article 370, instant triple talaq, or the all-round development of a powerful India, many achievements could be credited to the leadership of Modi as the Prime Minister.
On this occasion, Chief Minister Dhami also enumerated the achievements of the state government while mentioning the ongoing central projects in the state. The Chief Minister said that, with the cooperation of the Union Government, many such works had been done in the State, which earlier seemed impossible. In the last five years, various projects worth more than Rs 1 lakh crore had been approved by the Union Government for the state. Many of these projects had either been completed or were nearing completion. While one used to dream about trains in the hills, this dream would also soon become a reality with the Rishikesh-Karnaprayag Railway Project. Work was underway also on the strategically and geographically important Tanakpur-Bageshwar rail project. Similarly, work on the Char Dham All Weather Road, Bharat Mala Project was also being done at a fast pace. The Char Dham Yatra was the lifeline for Uttarakhand and these projects would facilitate the Yatra, promote tourism and bring revolutionary changes to the economy. The biggest Free Vaccine campaign was being run under the able leadership of the Prime Minister.
The Chief Minister said that, for the last two years, the state battled the Corona epidemic. But, under the leadership of the Prime Minister, it did so firmly while, at the same time, taking forward the pace of development. Under Modi, the world’s largest covid vaccination campaign ‘Free Vaccine for Everyone’ was going on in the country. It was being appreciated all over the world. The state government had also successfully achieved the target of applying the first dose of Covid, ahead of schedule. Along with this, the second dose had also been administered to about 50 percent of the people. A relief package of Rs 200 crores was being provided for tourism, transport, areas affected by the corona epidemic, Rs 205 crores for the strength of the health sector and incentives for the personnel associated with it and Rs 118 crores for promoting women empowerment and employment. This amount was being sent directly to the accounts of the people through DBT.
The Chief Minister added that Uttarakhand had made unprecedented progress in the last five years in the fields of education, public health, electricity, water, connectivity, employment, women and child development, agriculture and irrigation. The development work that the BJP government had been doing in Uttarakhand under the leadership and guidance Prime Minister was unprecedented. The state was moving towards achieving the goal of a self-reliant India by making lakhs of people self-employed through Mukhyamantri Swarozgar Yojana and Nano Udyam Yojana.

Garhwal Post has established itself as a credible, balanced and forward looking newspaper in India. Based in Uttarakhand, the daily is read by the aware, socially and culturally responsible, high-income elite of society.
Contact us: info@garhwalpost.in
mature asian dating