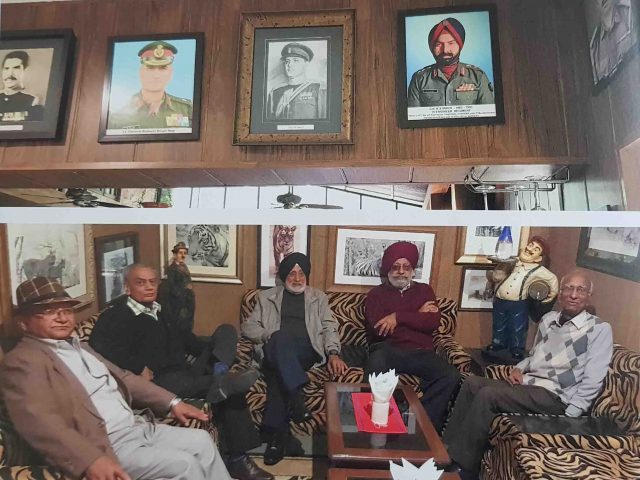 Vishranti Resorts is, indeed, an excellent place outside Dehradun, in the midst of natural tranquility, surrounded by the Himalayan hills, noise free, pollution free, a peaceful to stay and enjoy with friends and family members. One always enjoys the great hospitality of the entire staff members there.
It is amazing to see, in particular, a great collection of defence memorabilia, including photographs of senior veterans, displayed in a beautiful way. I salute to those who have thoroughly planned and executed it so nicely, greatly pleasing the visitors.
During my last visit there a few months ago with friends like Brig & Mrs KG Behl, Col & Mrs KS Mann, Col & Mrs BD Gambhir, Capt NC Sehgal, Suzanne from the USA and many others, I felt very happy and proud to see the separate galleries for each group of senior defence personnel on display boards, including the paratroopers.
Michael Dalvi and Madhuri, owners of Vishranti, have both taken a lot of pain to maintain this beautiful resort liked by everyone. Michael Dalvi comes from a defence background right from the First World War.
Mike’s grandfather was in the British Indian Army and fought in the World War One and, his father, the late Brigadier JP Dalvi of Brigade of the Guards, commanded the 7th Infantry Brigade of the Indian Army during the 1962 Sino-Indian war. His men were captured by the Chinese army and even lost their lives. Major Dhan Singh Thapa was declared a war casualty in 1962 but, later, appeared as a Prisoner Of War (POW).
Michael Dalvi was a great Indian cricketer from 1966 to 1982 and was famous for his batting.
There is a good collection of various types of birds and other species, which is worth watching and very well maintained.
Great hospitality will always remain a green industry for all time. All those who visit the resort wish the management and staff will continue with the good work.