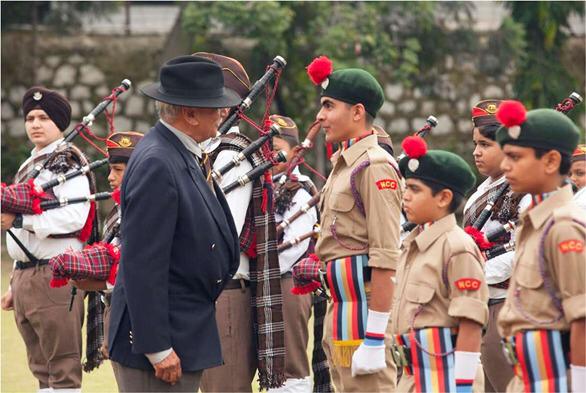 By Our Staff Reporter
DEHRADUN, 21 Nov: Welham Boys’ School is all set to host the fourth edition of the prestigious Military History Seminar, virtually, on November 24 and 25, 2020. This edition like all the previous ones, promises to be extremely engaging and educative and has already had participation confirmations from close to  thirty schools across the country.
In the year 2017, when Welham Boy’s School took it upon themselves to introduce their students to the hitherto ignored subject of Military History, many an eyebrow was raised. In the inaugural session of the first ever Military History Seminar, when the Chairman of the school, Darshan Singh spelt out the emerging threat from China, many thought he was being unduly alarmist. However, his remarks and subsequent monthly sessions conducted by the highly respected writer and film maker,  Shiv Kunal Verma, further expanded on the rationale of geo- politics, which encouraged critical thinking among the young minds. Hopefully, some of the wisdom would have rubbed off on many, thereby making them keen students of the developments around them. With close to forty schools sending delegations every year, the seeds that have been sown by Welham Boys’  have hopefully germinated across the country.
This year, under the stewardship of Sangeeta Kain, the fourth edition is being held online. Six sessions have been planned over two days. Both the opening and closing sessions are being presided over by the former Army Chief, General Ved Prakash Malik and the former Naval Chief, Admiral Sunil Lanba.
The four other sessions are being moderated by Air Marshal Anil Chopra and Major General Jagatbir Singh. The second session on November 24 – Dragon at the Door I (Army) features three highly respected Lieutenant Generals, KJ Singh, PJS Pannu and Balbir Sandhu. Major General Jagatbir Singh, an alumnus of The Doon School, will draw upon the collective experience of the panelists who will expand upon the current situation from the perspective of the Army. Lt. General Balbir Sandhu, an ASC officer, brings to the table the logistical angle as well.
In 1962, the refusal of the then government to use the IAF as an offensive weapon resulted in the PLA having things much their own way. The third session on day one – Dragon at the Door II (Air Force) – will be moderated by Air Marshal Anil Chopra, a former Mirage 2000 pilot who commanded the famous No. 1 Squadron better known as the TIGERS. He will be joined by Air Marshals Bahadur Manmohan and Ramesh Rai, who between them will enlighten the audience about the various nuances of air power especially in the context of taking on and deterring any Chinese misadventure.
On day two, November 25, the first two sessions will be moderated by Major General Jagatbir Singh. Session IV will deal with the fighting in J&K in 1947-48, focusing on certain new perspectives that have emerged thanks to publishers and writers that include Colonel Ajay K Raina, Brigadier Rajendra Singh and Pankaj Singh of the Browser who has co-authored a book on Brig Pritam Singh, the man who literally saved Poonch from the marauding Pakistan-sponsored tribal lashkars.
Session V (second on day two) will have Commodore Srikant Kesnur and Kajari Kamal who will look at the post-US election scenario with the emerging equation in the Indian and Pacific Oceans. Kajari Kamal an alumna of the Welham Girls’ School is now based in Hyderabad. Her overview of the geo-political scene with Commodore Srikant Kesnur focussing on the Naval perspective will be moderated by Major General Jagatbir Singh.
The final session (closing ceremony) will be moderated by Shiv Kunal Verma who will be in conversation with Darshan Singh and Admiral Lanba. The former Naval Chief, apart from sharing his views, will also interact and take questions from students. Finally, the School Captain, Sannidhya Agarwal of Welham Boys’ will deliver the vote of thanks on behalf of Team Welham. Recordings of the various sessions will also be uploaded subsequently.

Garhwal Post has established itself as a credible, balanced and forward looking newspaper in India. Based in Uttarakhand, the daily is read by the aware, socially and culturally responsible, high-income elite of society.
Contact us: info@garhwalpost.in
https://garhwalpost.in/woman-looking-for-man-in-daveyton/ best dating sites for professionals over 50 apps to hook up with trans