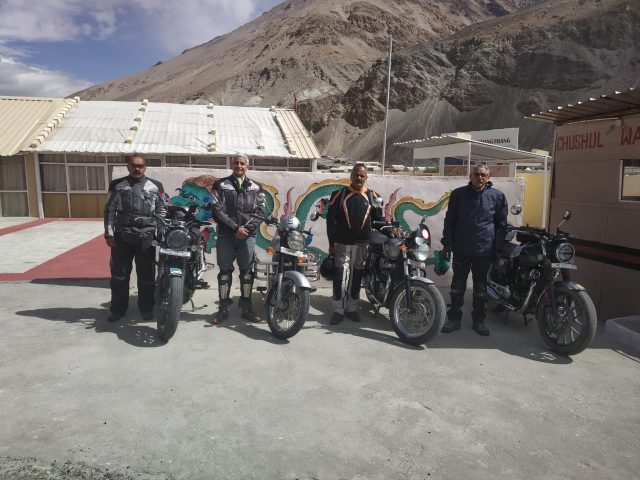 Dehradun, 12 Aug: The Whimsicals, a group of veteran motorcycle enthusiasts, continue with their expedition. They left Tangtse for Chushul. The ride carried them through more picturesque terrain, the narrow valley of the Tangtse River.
The road traversed gently uphill till it plunged down towards Chushul over 17 loops, much like the Gata loops – but at a comparatively lower elevation and the road surface was unmetalled.
Descending the Chushul loops gives the viewer a panoramic but distant view of some of the heights on both sides of the Pangong Tso, as also the LAC.
The road traffic was predominantly defence vehicles. What attracted attention was the cheerful persona of the jawans despite the rigours of life in such a harsh environment. The people sleep in peace because of the grit and valour of these jawans.
On reaching Chushul, the Whimsicals found the place wore a festive look. The villagers and the jawans were getting ready to receive the Victory Torch. On our return journey to Tangtse, we were fortunate to cross paths with the Victory Torch carrying vehicles.
Chushul is the last Indian village overlooking, both, the famous Pangong Tso to its Northeast and the vital Spanggur Gap to its East.
It has been witness, in the past, to historic landings by light aircraft on its airstrip, now in disuse, and the Hut where world stage flag meetings took place between Indian and Chinese Army officials to resolve the recent standoff.
It had witnessed, with a heavy heart, the heroic exploits of Maj Shaitan Singh, PVC, and his Company, during the 1962 war, when they fought the Chinese to the last man at Rezang La.
Again in 2020/21, it has stood tall as a proud witness to the Indian riposte of occupying the Magar and Gurung Hills complex, consequent to Chinese incursions in Ladakh.
Chushul has also been an awed spectator to the largest ever high altitude amassing of mechanised forces in the world.
Most importantly, Chushul personifies the bridge that connects India to the people of Tibet.
The bikers were disappointed at having to give the go by to their planned ride to the Rezang La War Memorial owing to shortage of time.
They were back at Tangtse by evening.
Now, they are looking forward to the ride along Shyok River to the Day 9 destination – Partapur.