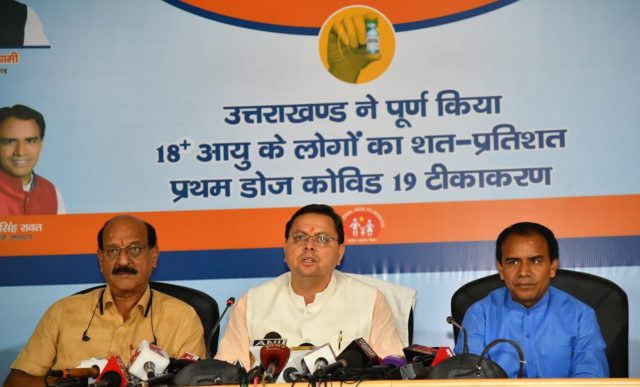 Dehradun, 17 Oct: Chief Minister Pushkar Singh Dhami announced at a press conference on Sunday that Uttarakhand had provided the first dose of Covid vaccinations to hundred percent of its elgible population. He appealed to the people to ensure they received the second dose as well. He praised health workers, the police, workers of various departments, social activists, religious organisations, the media and the general public for helping achieve this target. He said that, as soon as the Centre permits vaccination of those less than 18 years of age, the state would begin to inoculate that group, as well.
He reminded that Uttarakhand had begun its vaccination campaign on 16 January, 2021. Steps were being taken at every level to encourage vaccination. As many as 77,29,466 persons above the age of 18 were to be vaccinated in the state. Health care and frontline workers were vaccinated first, followed by those above the age of sixty. These were followed by the age group between 45 and 59, and then those above 18 years of age. By 16 October, first doses were given to 99.6 percent health care workers, 99.2 frontline workers and 96.1 percent of those above 18 years of age. Pregnant women are being inoculated after proper medical consultation. Contra-indicated persons and the very few unwilling persons had been left out.
Present on the occasion were Cabinet Ministers Subodh Uniyal, Dr Dhan Singh Rawat, RS MP Naresh Bansal, Additional Secretary Sonika, and DG, Health, Dr Tripti Bahuguna.