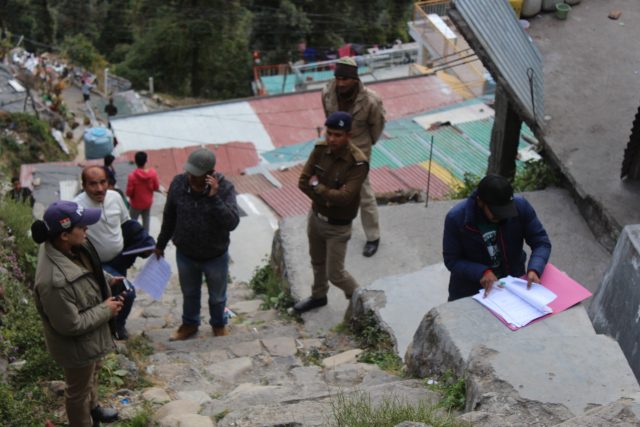 MUSSOORIE, 24 Nov: The Mussoorie Municipal Council has served notice directing 80 families residing at Shifan Court to vacate ‘illegal encroachment’ on municipal land within 7 days. The notice is under Section 211 of the Municipality Act, 1916, issued by the municipal executive officer, ML Shah. In case of non-compliance, the municipal administration will take action to remove the construction. More than 80 families residing in Shifan Court were in panic after the municipality ordered them to vacate the place where they have rising over the last 25 years. They said that they were earlier assured that they would be relocated before their removal, but the municipality had not done so. They have demanded that the municipal administration and the government first resettle all the residents before they would be prepared to leave. Acting tax inspector Mahavir Singh Bhandari said that, following the instructions of the executive officer, about 80 families residing in Shifan Court are being given notice to vacate the construction done on the land. He said that most have the people hadn’t accepted the notice and it had to be pasted on the doors of their houses. Former Municipal Chairman Manmohan Singh Mall strongly objected to the notice given to the 80 families. He said that under the Mussoorie Dehradun Purukul Ropeway, a platform had to be built on a part of Shifan Court. He said that the land belonged to the municipality. The municipality should arrange alternatives for the 80 families. He said that the Palika administration was working without a plan, due to which people were facing a lot of trouble. Recently, the work of relocating street vendors was also done without any plan, which had caused a lot of inconvenience. He said the Congress party would strongly oppose action by the municipality against the Shifan Court residents.

Garhwal Post has established itself as a credible, balanced and forward looking newspaper in India. Based in Uttarakhand, the daily is read by the aware, socially and culturally responsible, high-income elite of society.
Contact us: info@garhwalpost.in
cam flirt best dating apps for 35 reliable dating apps for relationship