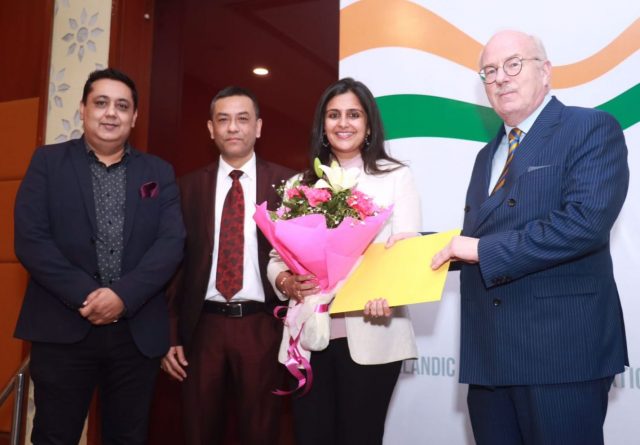 By Our Staff Reporter
Dehradun, 13 Nov: Ambassador of Iceland in India, Gudni Bragason, was warmly welcomed to Dehradun and a reception was held in his honour at Hotel Madhuban on his visit to Dehradun last evening. The reception was organised by the Chairman of the Indo Icelandic Business Association (IIBA), Prasoon Dewan. Bragason’s Doon visit organised in collaboration with IIBA was intended to explore the possibilities of bilateral trade and culture between India and Iceland. 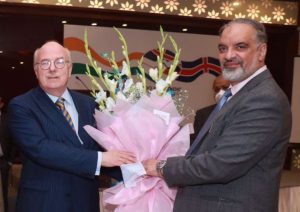 Speaking on the occasion, Bragason said that he was happy to be in Uttarakhand and the beautiful city of Dehradun, and he added that Iceland was looking forward to discuss mutual opportunities in the field of education, culture, tourism, renewable energy, environment, hi tech, software, gaming, films, healthcare, food processing, fishery, gender equality, women empowerment including Uttarakhand. He added that he had joined his present posting as Ambassador of Iceland to India in July this year and was looking forward to having a fruitful tenure in India. He also praised the efforts of IIBA in organising the programme and for promoting trade and relations between the two countries.

It may be recalled that The Indo Icelandic Business Association (IIBA) aims at supporting collaboration, knowledge transfer and provides updated information about political, economical, cultural or legislative issues relevant to business and commerce while functioning in close cooperation with the Embassy of Iceland in India.

On the occasion IIBA’s Advisory Board member Siddharth Swaminathan and members Dalip Dua, Pooja Marwah and Ritesh Sapra were present. The reception was attended by The Deputy Head of the Icelandic Mission Sigthor Hilmisson and trade Councellor at the Embassy Rahul Chongtham who also holds the position of the secretary of the IIBA.
Philanthropist Dr S Farooq, owner of Garhwal Post & Actor Satish Sharma, BJP’s Deepti Rawat Bhardwaj, Saurabh Thapliyal, Veteran Journalist & Actor Dr Anjali Nauriyal, Wing-Commander (Retd) Anupama Joshi, Rakesh Oberoi, Anil Goyal, Pankaj Gupta, Anoop Nautiyal, were also present amongst others.
It may also be recalled that yesterday, Bragason had also called on Chief Minister Pushkar Singh Dhami at the Chief Minister’s residence. On this occasion, bilateral trade and cultural promotion, education tourism, fisheries, geothermal energy in the form of green energy and other possibilities were discussed between the two sides. Bragason, appreciated the work being done by the state government in the direction of tourism, education, self-employment, self-reliant India.
Ambassador of Iceland visited The Doon School, Wadia Institute of Himalayan Geology and the holy city Rishikesh during his two day visit to Uttarakhand.
Ambassador of Iceland with his team and the Chairman of the IIBA visited The Doon School, Wadia Institute of Himalayan Geology after a very fruitful meeting with the minister of Renewable Energy Harak Singh Rawat and concluded the two day trip to Uttarakhand while visiting the holy city Rishikesh.