Dehradun, 12 May: Under the aegis of Doon Visual Arts, an interaction took place over tea at the Inderlok Hotel, here, today.
The talk, as famous artist Jatin Das specified was ‘ ..not about socialising but spreading awareness..’. The meeting started with a brief introduction by artist Kulina Shah, currently also an instructor at Graphic Era Hill University. Shah expressed her gratitude at having been contacted by Das to organise the event on the urgent matter at hand, conservation and restoration of art and monuments of the beloved city, Dehradun. 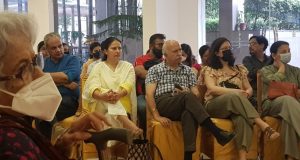 She went on to tell the audience about how Mohit Dang, art enthusiast and owner of Inderlok Hotel, had played an instrumental role in organising the event at his premises. The main agenda of the meeting was ‘to form a holistic society/committee of artists, architects, painters, potters, photographers, historians, etc., which aims to preserve the city and eventually the earth as a larger outlook for the betterment of the coming generation.’ 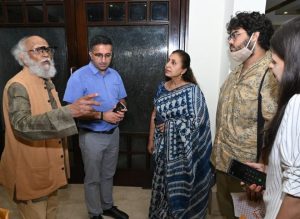 Padma Bhushan Jatin Das started by expressing his main concern for the city by narrating his shock at bridges being built across rivers and the cutting of mountains, for providing a better route to the tourists. He remarked, “This country is a Gold Mine and we have been systematically destroying it for years.” In his past fifty years of coming to Dehradun and Mussoorie, he had never seen the trees being cut and land being exploited at this rate. His personal opinion of the term ‘smart city’ seemed to be vulgar for smartness does not mean destroying nature and its beauty. Das had also brought along a carton of ‘Kulhars’ to make a point about giving employment and livelihood to local artisans and craftspersons. He suggested many ideas which could be implemented by persons in various organisations to give artisans employment; such as the promotion of local artists by displaying their works in local shops and hotels. He also insisted on artisans of all sorts supporting each other and working together in order to build a community. Whilst Jatin lectured, many in the audience also added to the conversation.
Famous Artist and former business owner, Smiti Salaam Seth spoke about her journey in the field, starting with helping craft persons and artists; while Satpal Gandhi, an upcycling junk artist spoke about the importance of his use of disposed materials and converting them into art.
Three young girls from Purukul Stree Shakti spoke about their new outlook to reviving their work after nineteen years and providing employment to over 100 artisans, while Jatin provided further ideas.
The mural artist (Das) went to explain the meaning of ‘We are all responsible’ and appealed to the ‘Doon Arts Society’ to make a museum in the city which would contain paintings of eminent local artists such as Sudheer Khastagi (painter of the Bengal School), Ratin Mitra (painter and former teacher at The Doon School); and other upcoming generations. Known personalities such as author & Retd IPS Aloke B Lal, artist Manas Lal; author and philanthropist Dr Anjali Nauriyal; and Jatin Das’ friend and peer from JJ School of Arts, Padmini Lulla, Phalguni Das, Retd IFS Jai Raj & his wife Sadhna, Lokesh Ohri were also present.

Garhwal Post has established itself as a credible, balanced and forward looking newspaper in India. Based in Uttarakhand, the daily is read by the aware, socially and culturally responsible, high-income elite of society.
Contact us: info@garhwalpost.in
cougar dating website