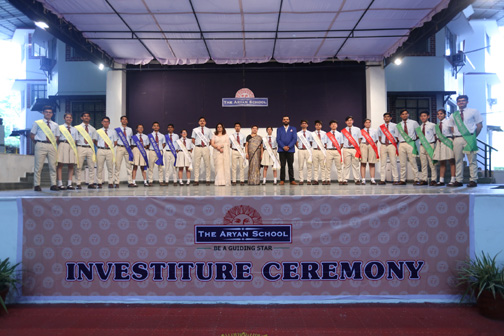 By OUR STAFF REPORTER
Dehradun, 28 Apr: The Aryan School conducted its Annual Investiture for the academic year 2019-20 on Saturday. The Chief Guest on the occasion was Colonel Harish Sethi.
The programme commenced with the oath-taking ceremony. The newly-elected council was awarded badges and sashes by the supervisors, which symbolise their responsibilities.
Rajnish Kumar Paswan was nominated the Head Boy, while Lavanya was selected as the Head Girl of the 2019-20 batch.
Chief Guest Col Sethi appreciated the efforts of the school by providing opportunities to the students to take part in leadership activities. He also congratulated the newly appointed school prefectorial board for their preparedness to take responsibilities.
Principal B Dasgupta encouraged the elected leaders to be dutiful and responsible in her address to the gathering.
Dev Ratra and Pema Laden Lepcha were appointed vice-captains, Boy & Girl, respectively, while Nandan Gureja and Punit Tyagi were selected the school coordinators.
Vedansh Nigam, Gauri Dhingra, Priyam Khandway, Alisha Khan, Harsh Rehal, Muskan Agarwal, Gaurav Rawat and Mehak Puri were nominated Captains of the four houses: Atharva, Rig, Sama and Yajur, respectively.
The programme concluded with the school song followed by the National Anthem. Present on the occasion were Simi Gupta, Vibhor Gupta, staff and students.