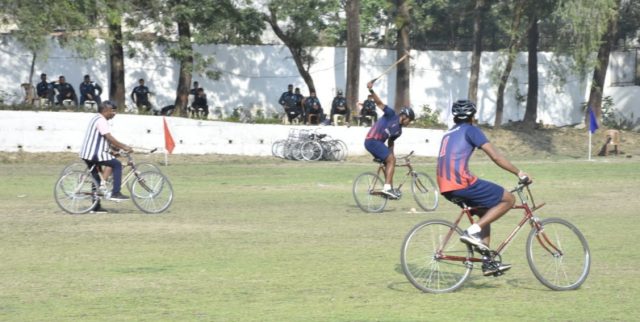 DEHRADUN, 18 Feb: 15th Cycle Polo Federation Cup 2021 was inaugurated at a local school in Malsi today by Lt Gen AK Singh, Former Lt-Governor, Andaman & Nicobar Island, in a glittering ceremony attended by a galaxy of stalwarts of Cycle Polo which included the President Cycle Polo Federation of India Air Marshal Pardeep P Bapat, Thakur Raghuvender Singh Dundlod, Former President CPFI and Former Secretary Rajasthan Olympic Association, Vice President, technical committee of CPFI and President Asian Cycle Polo Association, Gajanan Burde, CEO of CPFI, Former Secretary General CPFI to name a few. The ceremony also witnessed a colorful and synergetic march past by the participating team with the rhythm of Army Band which was a treat for the beholders. It was followed by an emotional moment of oath taking by the Captain of the Indian Team, Assarudeen Sha.

The tournament is well balanced and competitive as the best eight teams and one debutant, Uttarakhand teams are contesting for the coveted trophy. The pool A comprises of Air Force, West Bengal, Maharastra, Army and Uttarakhand whereas Pool B comprises of teams from Territorial Army (TA), Chhattisgarh, Kerala and UP. In all 21 matches will be played from 18th to 20th February to prove their supremacy coupled with skill, talent, stamina, swiftness and perseverance.

In the opening ceremony the Chief Guest, Lt-General Singh shared his memories and inspired all teams to play with ultimate sportsman spirit and follow the rules of the game. He said that Bicycle Polo is the common man’s Polo game which is affordable and interesting. He got nostalgic as he travelled through the memory lane of good old days when he used to play traditional Cycle Polo with hard ball and for hours together. His liking towards the game was very much visible in his words of inspiration to the young budding teams whom he urged to work hard to give due recognition to this remarkable thrilling, adventurous common man’s game.

Gp. Capt Deepak Ahluwalia, Vice President, CPFI, gave a detailed insight of the evolution of Cycle Polo from its infancy to become a world Cup tournament. He also briefed the august gathering about the Saga of success in Cycle Polo which came to the helm in 2019 when Indian Cycle Polo teams trounced the big names like Argentina, America and Canada in Buenos Aires and emerged as a undisputable World Champion.

The day became all the more memorable as the Chief Guest felicitated the members of Indian Squad who were instrumental in lifting the World Cup title at Buenos Aires in Argentina. The prominent players felicitated were Assarudeen Sha Captain of India Team, Sadham HVP, Anshad A, Anfar J, Piyush Sinha and Vishnu Shaji.

In the first match of day between Air Force and the debutant Uttarakhand team, in their maiden match, displayed a very competitive and spirited performance but the experience and the agility of Air Force team was extra ordinary, the final score being 11-3 in favour of Air Force. The match between Territorial Army (TA) and UP was once again was a one sided affair in which Territorial Army (TA) trounced UP by 16-1. The third match of the day between the host Uttarakhand and Maharastara witnessed a clear wash off of Uttarakhand by 21-0. In the most competitive match of the day between UP and Kerala, the match swung like a pendulum from one side to other but in the last quarter the UP Boys showed their calm and composed temperament with an offensive strategy fetched them the edge over their rival Kerala by winning the match, 10-7.

In the post lunch session the match between Chhattisgarh and Territorial Army ( TA) was a treat to watch as both the teams fought for supremacy vigorously, cycling with astounding pace and balance scoring goals and counter goals but Chhattisgarh team displayed some strategic moves clinching the well fought battle from the jaws of Territorial Army ( TA) 10-8. Indian Army team once again proved their worth by trouncing West Bengal in the one sided match 15-3. In the most competitive match of the day between Indian Army and Indian Air Force which witnessed some injuries, Assarudeen Sha Captain of Indian Air Force Team displayed some magical game movements and eventually trounced Indian Army by 16-6. In a closely contested last match of the day Maharastra narrowly defeated West Bengal 7-6.

The youngsters depicted the defensive technique through the presentation of Judo in the most presentable manner and displayed how one can be self defensive in the hour of crisis. That was indeed the most worthy presentation which depicted the art of survival of the fittest.