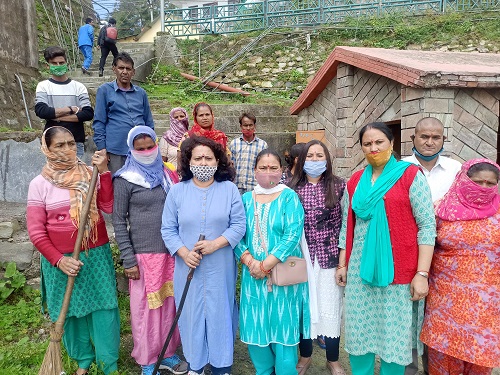 By Our Staff Reporter
Mussoorie, 7 Oct: The BJP launched a cleanliness campaign in Mussoorie on the last day of its ‘Sewa Samarpan Abhiyan’, here, today.
A thank you letter was also sent by the party’s Mahila Morcha for the free vaccine provided to the entire country by PM Modi.
On the last day of the service dedication campaign that started on the birthday of Prime Minister Narendra Modi, a cleanliness campaign was carried out by the BJP Mahila Morcha in Mussoorie under the leadership of Mussoorie BJP Mandal President Mohan Petwal and Mahila Morcha President Pushpa Padiyar at Malingar Chowk, here.
Mussoorie Mahila Morcha President Pushpa Padiyar said that on the 71st birthday of the Prime Minister, for 21 days BJP workers carried out ‘Seva Samarpan Abhiyan’ in the entire country, in which many public interest works including cleanliness campaign and vaccination were done. On this occasion, Pushpa Padiyar, while expressing gratitude to the sanitation workers of the country, said that during the Corona period, these workers had saved the lives of the people by serving in the front line, regardless of their lives. She said that Cabinet Minister Ganesh Joshi always emphasises that sanitation workers should be respected. She said that under the leadership of Prime Minister Narendra Modi, the country is succeeding in winning the battle against Corona.
Among those present on this occasion were BJP President Mohan Petwal, Kushal Rana, Mahila Morcha General Secretary Sapna Sharma, Yuva Morcha General Secretary Abhilash, Anita Pundir, Vijay Badola, Leela Kandari, Pushpa Pundir, Rajeshwari Negi, Geeta, Priya and others.